In March 2020, the coronavirus pandemic suddenly brought social and economic activities to a halt across Canada, with data showing serious impacts on labour market activity. Recent estimates from Statistics Canada show that 1 million fewer Canadians were employed in March than in February, and the usual labour market activity of 3.1 million Canadians was affected (i.e. worked fewer hours or lost their job).1

According to survey data for April 10–12, 2020 from the Vanier Institute of the Family, the Association for Canadian Studies (ACS) and Leger,2 38% of men and 34% of women aged 18 and older said that they lost their job temporarily or permanently, or experienced pay or income losses, due to the COVID-19 pandemic. Consequently, 27% of men and 25% of women reported a negative financial impact (i.e. ability to pay mortgage or rent and/or their bills).

Not surprisingly, Statistics Canada recently found that adults who suffered a major or moderate impact of the pandemic were much more likely to report fair or poor mental health than those who were less impacted (25% and 13%, respectively).3

Data collected in mid-April by the Vanier Institute of the Family, the Association for Canadian Studies and Leger show that younger adults have been particularly affected: more than half (52%) of those aged 18–34 reported a negative impact on their labour market activity (job or pay/income losses), compared with 39% of those aged 35–54 and 21% of those aged 55 and older. This is reflected in the shares of adults experiencing immediate negative financial outcomes, which were reported by 33% of adults under 55 and 15% of those over 55.

Among the core working age population (aged 18–54), just over half reported feeling anxious or nervous (53%), irritable (49%) or sad (48%) often or very often during the COVID-19 pandemic, according to the Vanier Institute/ACS/Leger survey. Four in 10 reported difficulty sleeping (40%) and having mood swings (40%) often or very often.

Among those who experienced immediate negative outcomes, such as not being able to pay rent or mortgage and/or their bills, about 6 in 10 reported anxiety or nervousness (63%), irritability (60%) or sadness (57%) often or very often, whereas half said they have had difficulty sleeping (50%) or experience mood swings (52%) often or very often (fig. 1). 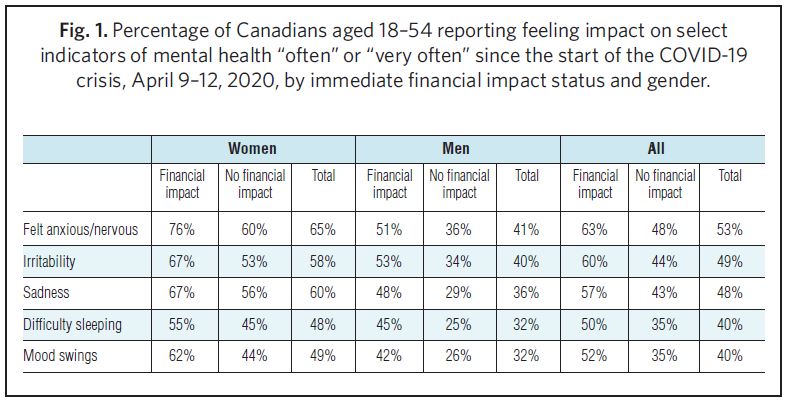 According to the 2018 Canadian Community Health Survey, women were slightly less likely than men to report excellent/good mental health (66% and 71%, respectively).4 During the coronavirus pandemic, however, Statistics Canada found a much larger difference, at 49% of women and 60% of men.5

This difference by gender in reporting mental health issues is maintained even when examining the proportions of men and women who suffered immediate negative financial outcomes and those who did not. For instance, three-quarters of women (76%), compared with half of men (51%), who had difficulty paying mortgage or rent and/or their bills reported feeling nervous or anxious often or very often. Almost 7 in 10 women in financial difficulty experience irritability (67%) or sadness (67%), compared with about half of men in the same situation (53% and 48%, respectively) (fig. 1).

Adults with financial difficulties report similar mental health issues, whether living with young children or not

If women are significantly less likely than men to report positive mental health during the pandemic, even when financial outcomes are controlled for, what factors might be at play in creating these gender differences? Could these mental health challenges be related to family responsibilities?

An analysis of the April 10–12, 2020 data indicates that heightened symptoms of poor mental health do not appear to be linked to the presence of children in the home. Women who live with children aged 12 and younger in the household report experiencing anxiety (69%), irritability (60%), sadness (59%), difficulty sleeping (51%) and mood swings (51%) often and very often in similar proportions as women who do not live with children (63%, 57%, 60%, 47% and 48%, respectively). Men who live with young children also report these problems in similar proportions as those who do not (fig. 2). 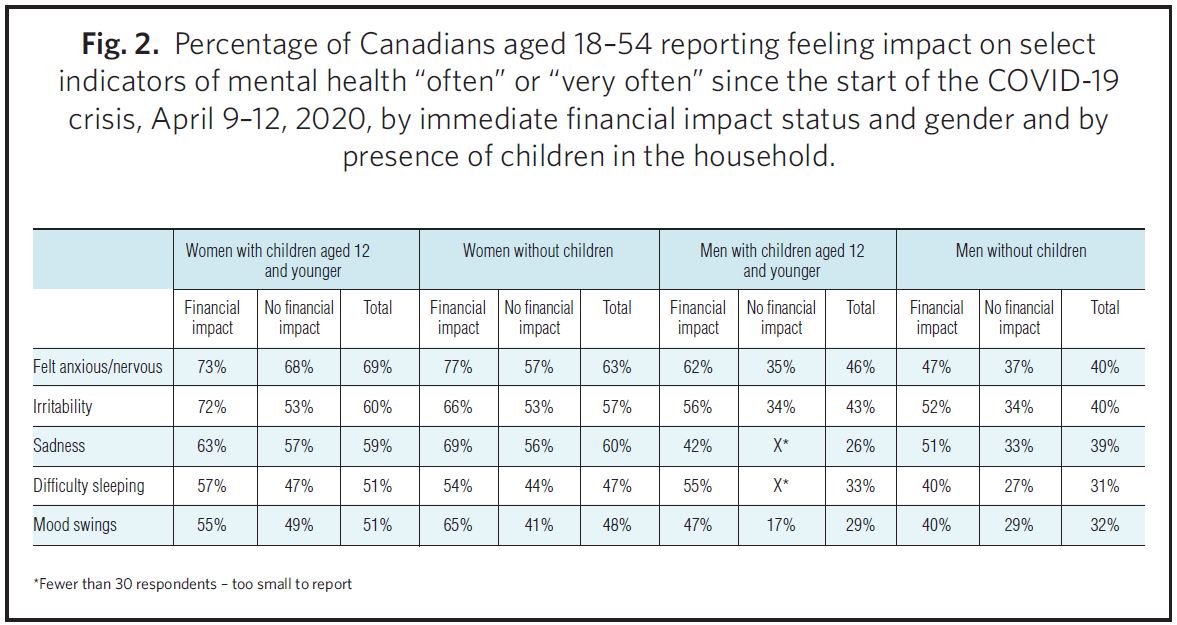 Among women in financial difficulty, there is little difference in the share reporting any of these mental health problems whether they have young children living in the household or not. This is also true among women who did not experience immediate negative financial outcomes: living with children aged 12 and under in the household does not appear to make a difference (fig. 2).

Analysis of self-reported mental health status shows that some of the differences by gender persist when controlling for province of residence, age, financial difficulty, job/pay loss, presence of children aged 12 and under, household income, marital status and educational attainment. Controlling by these variables and compared with men who are in financial difficulty, women in financial difficulty are about twice as likely to suffer from anxiety, sadness or mood swings. Among adults who have not suffered financial negative outcomes, there are no significant differences between men and women in mental health outcomes once controlling for these factors.

While this analysis could not pinpoint potential reasons why women are more likely than men to report poor mental health symptoms, future research may seek to focus on psychological differences between women and men in crisis situations in order to determine whether or not women and men react differently in crisis situations or when there is an immediate threat to personal or family health and well-being. More research on the impact of gendered aspects of household work and caregiving, including the mental burden associated with these types of unpaid work, might also shed light on these differences.