Nearly half of adults aged 18 years or older in Canada report feeling anxious/nervous (47%) or sad (45%) “very often” or “often” since the beginning of the COVID-19 crisis, according to survey data from the Vanier Institute of the Family, the Association for Canadian Studies and Leger, which was collected from April 9 to 12, 20201 (fig. 1).

Four in 10 report feeling irritable (39%) and about one-third report experiencing sleep-related problems (35%) and mood swings (32%) “very often” or “often” since the start of the crisis (fig. 1).

But are adults currently in a couple – whether common-law or married – as likely as those who are single or separated, divorced or widowed to experience feelings of unsettledness?

Feeling anxious or nervous very often/often is equally likely to be reported by adults who are part of a couple (48%) as by those who are single (47%) or separated, divorced or widowed (43%) (fig. 1).

Similarly, very often/often having difficulty sleeping is equally likely among those in a couple (35%) as among single adults (36%) or those who are separated, divorced or widowed (35%). 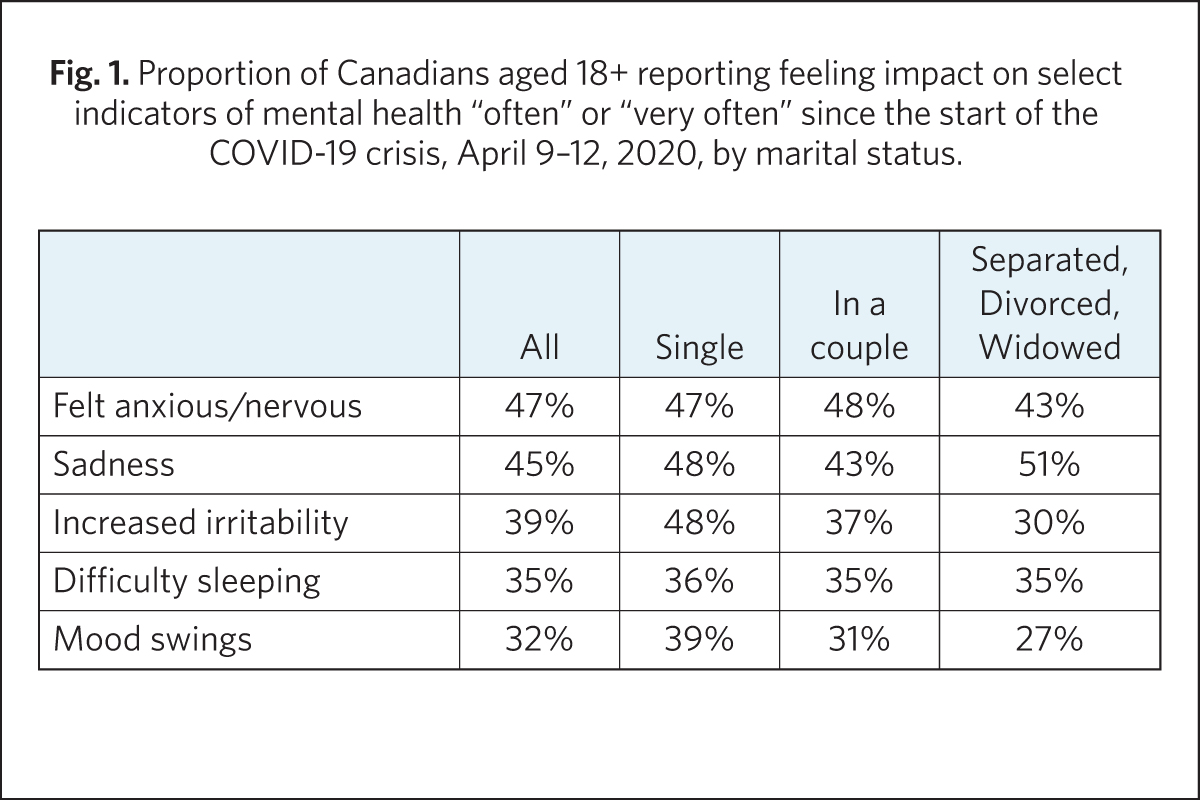 Whether single or in a couple, anxiety and sleeping problems are reported more by women than by men

Previous studies of mental health have found that women are more likely to experience anxiety disorders and depression compared with men.2 This appears to be the case in a pandemic environment as well.

Women are far more likely than men to report very often or often experiencing anxiety during the coronavirus pandemic: almost 6 in 10 women who were in a couple (58%) or were single (59%)3 report feeling anxious or nervous very often/often, compared with fewer than 4 in 10 men who were either in a couple (37%) or single (37%) (fig. 2).

As for challenges during the night, more than 4 in 10 women report difficulty sleeping very often/often since the beginning of the pandemic, whether or not they are in a couple (44%) or single (44%). This compares with fewer than 3 in 10 men, whether in a couple (26%) or single (29%).

Again, women, regardless of their marital status, are more likely than men to experience irritability or mood swings. About 6 in 10 single women (59%) and 42% of those in a couple report feeling irritable very often/often since the start of the pandemic. Men report being irritable very often/often in lower proportions than women, whether single (38%) or in a couple (32%) (fig. 2.). 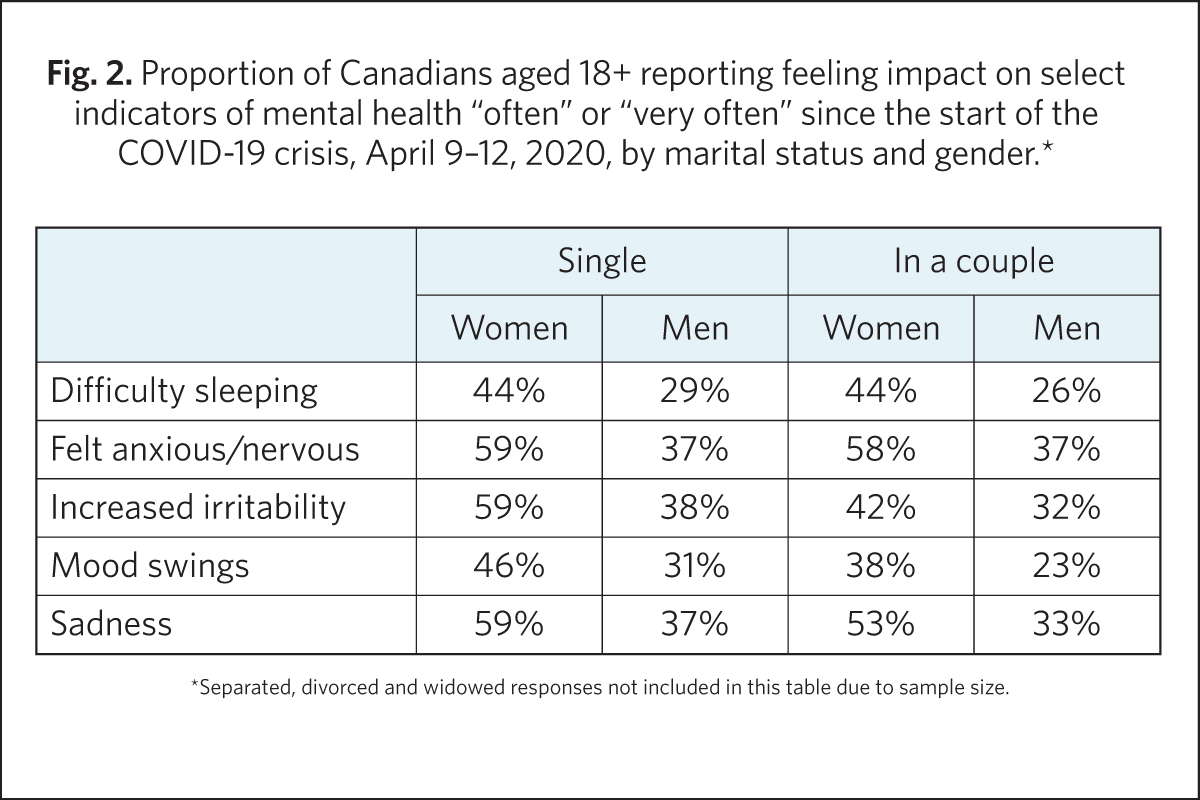 Separated, divorced or widowed women most likely to feel sad

Feeling sad very often/often during the coronavirus crisis is more commonly reported among separated, divorced or widowed (51%) and single (48%) adults, compared with those in couples (43%) (fig. 1).

Mental health trends, by marital status and gender but also by other factors, will be important to monitor in the short, medium and long term of the COVID-19 pandemic. An initial analysis has shown that income or job loss and immediate financial strain also affect mental health symptoms, such as anxiety and difficulty sleeping during the pandemic. Furthermore, mental and physical health are linked – people with a mood disorder are at much higher risk of developing a long-term medical condition than are those without.4

As such, the well-being of families in Canada is dependent upon on the mental health of the individuals who make up those families. Evidence-based decision making will better drive targeted social supports both for individuals and for families as the coronavirus progresses, as well as after the present crisis is over.