The demands of military life can be particularly stressful for military families due to deployments, relocations, foreign residency, periodic family separations, risk of injury or death of the military member, and long and unpredictable duty hours.

Although military families can usually manage demands individually, research has shown that competing and intersecting demands leave some feeling overwhelmed. This can be particularly true for single parents in the Canadian Armed Forces (CAF), who often manage these multiple roles with fewer resources. This could help explain why enlisted single parents (men and women) have been shown in previous research to be less satisfied with military life than their married counterparts.

Work–family conflict occurs when demands in the work domain are incompatible with demands in the family domain. Despite growing evidence that work–family conflict could be a considerable problem in Canada’s military families, the number of studies examining this topic is relatively small. In a recent qualitative study, the majority of single CAF parents reported that they were able to balance work and family life, but they admitted it was a challenge, primarily because many single parents are often the sole caregivers and financial providers for their families. As one study participant put it,

“So far, the balance between my professional life and my personal life has been quite good. But it’s difficult of course when it’s just me – having to stay late, for example, and still having to work on my phone. I have to have a BlackBerry because I can’t stay late – not as late as I used to anyway. But pretty good, overall.”

Single CAF parents may face multiple deployments and must deal with being separated from their children and not being able to care for them. Caregiver arrangements may be more complicated in these families, as, for example, the children may have to relocate to another city to live with grandparents when their mother or father leaves for a mission. In addition, single parents who experience frequent relocations may find it challenging to establish or re-establish local social networks, which are often a valuable source of support.

A few studies have suggested that single-parent military families have unique military life-related challenges and substantial work–family conflict, but there isn’t much research about this topic in a Canadian context. Director General Military Personnel Research and Analysis (DGMPRA) conducted a study to address this gap and explore the main concerns of single CAF parents. An electronic survey was distributed to a random sample of Regular Force CAF members who had children 19 years of age or younger and were single, divorced, separated or widowed. In total, the results were available for 552 single parents.

Single parents identified financial strain as a top concern; this is consistent with previous research showing that economic hardship is a leading cause of stress for single parents, both military and civilian. The second challenge for single parents was the worry about their child’s health and well-being. Although it has not been previously identified in research of civilian single parents, it is possible that this type of strain was high due to frequent parental absences related to deployment, training, unpredictable/inconsistent hours of work or overtime, common aspects of a military lifestyle. More than 60% of respondents identified financial strain and worry about health and well-being to be of considerable or extreme concern for them (see Figure 1). A large number of these parents (over 50%) were also concerned about dealing with adolescent years, doing the right thing for their children and their heavy demands and responsibilities. 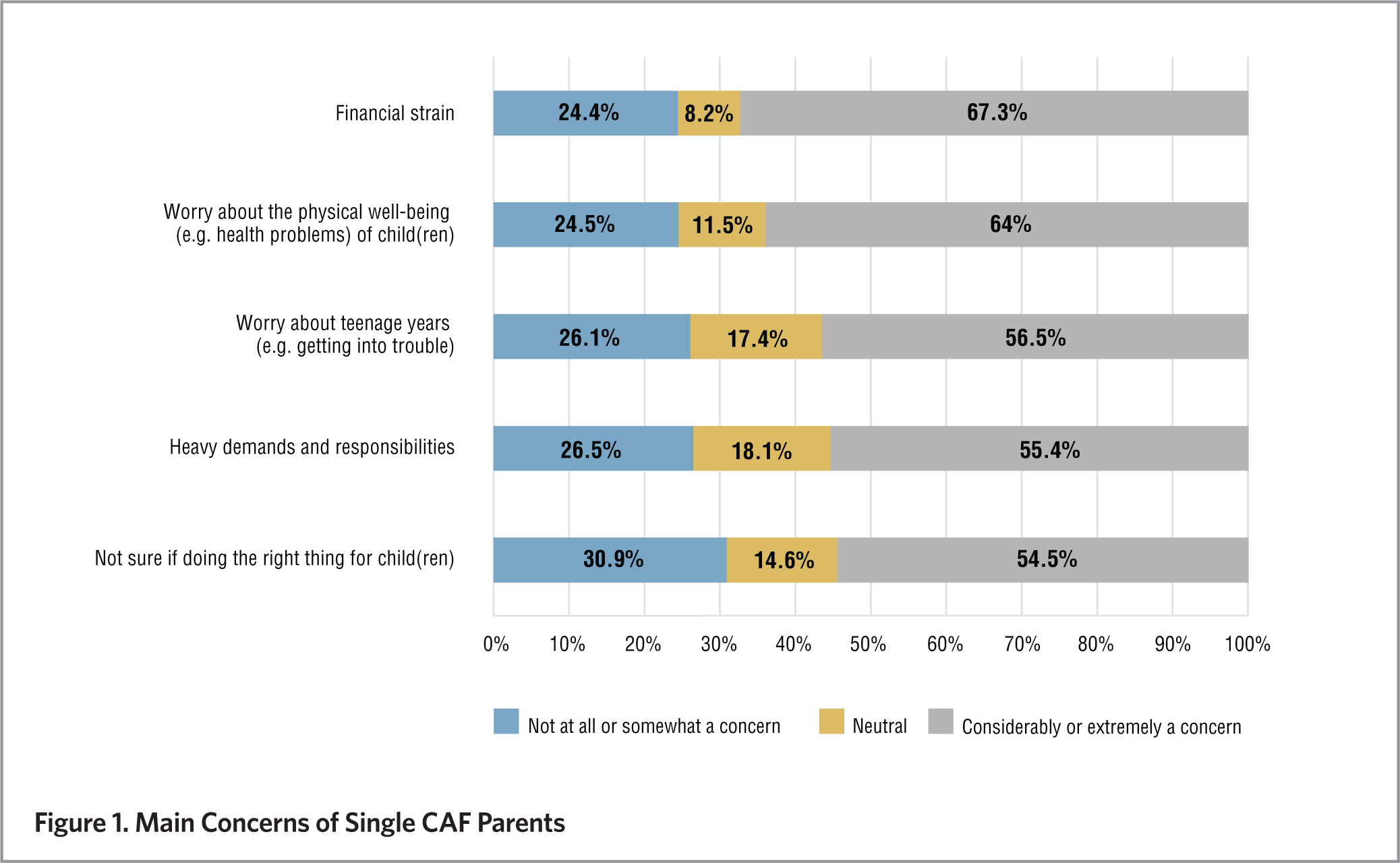 Managing parental and work responsibilities is not impossible, but it is hard

Single parents were asked to rate the extent to which their responsibilities as a service member and as a parent are in conflict. Most do not find it impossible to meet both parental and work responsibilities (see Figure 2). However, about 55% of respondents believe that it is not easy to be both a good parent and service member and feel divided between work and family responsibilities. About 44% of these parents believe it is hard to balance military and parental roles. This is consistent with previous research showing that single military parents are susceptible to experiencing work and family conflict. 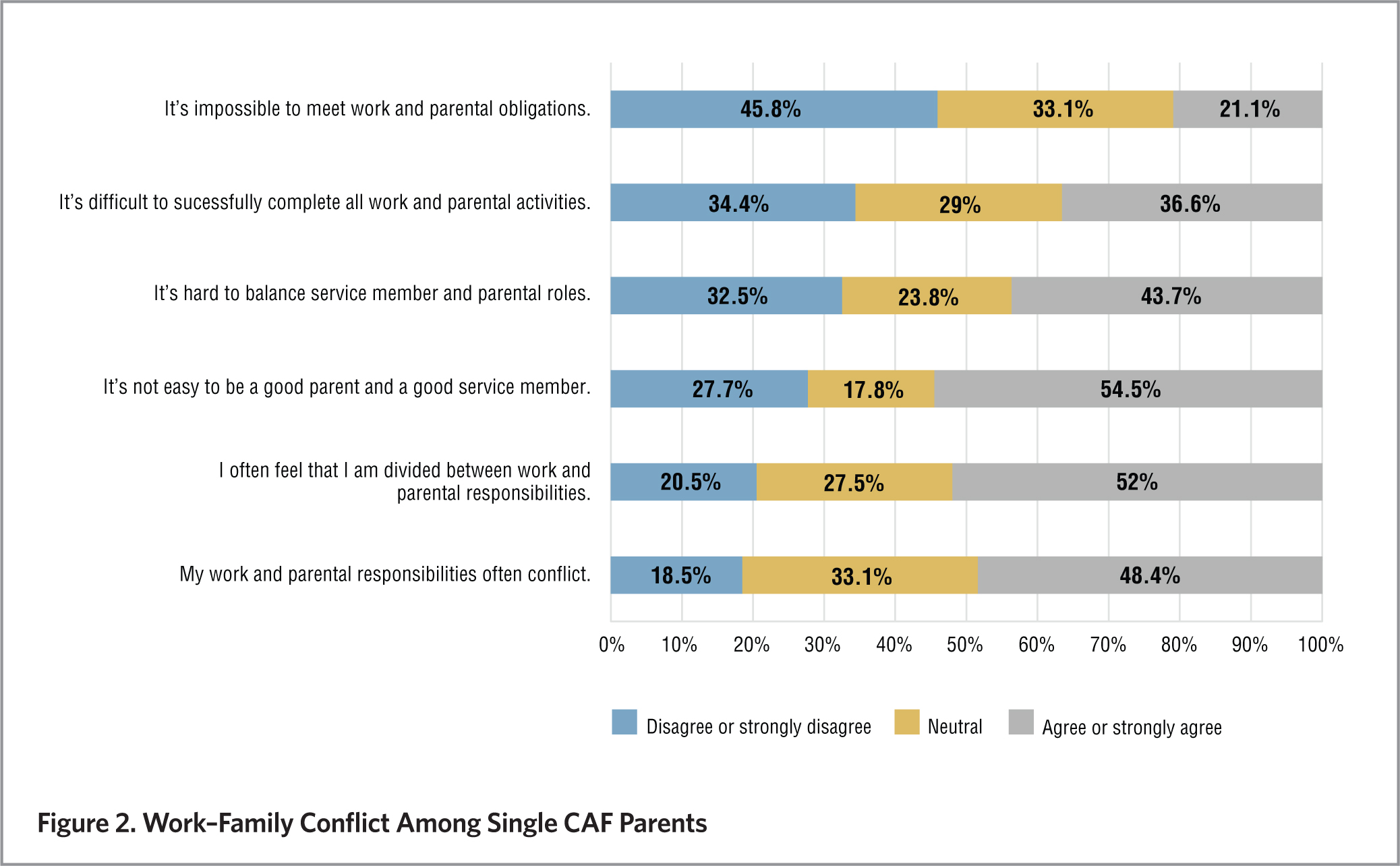 In order to examine organizational support available to single parents in greater detail, single parents were asked whether they were aware of CAF programs and policies that could assist them in managing family and work demands. The results demonstrate that many single CAF parents are not aware of services available to them. For example, less than 10% of the participants mentioned that they were aware of Military Family Resource Centre services available to single military parents. This feeling was shared by a participant in the previously-mentioned qualitative study:

“Not everything is well advertised; you need to go and ask. If you are moving to the larger city, look for housing close to a [Military Family Resource Centre].” 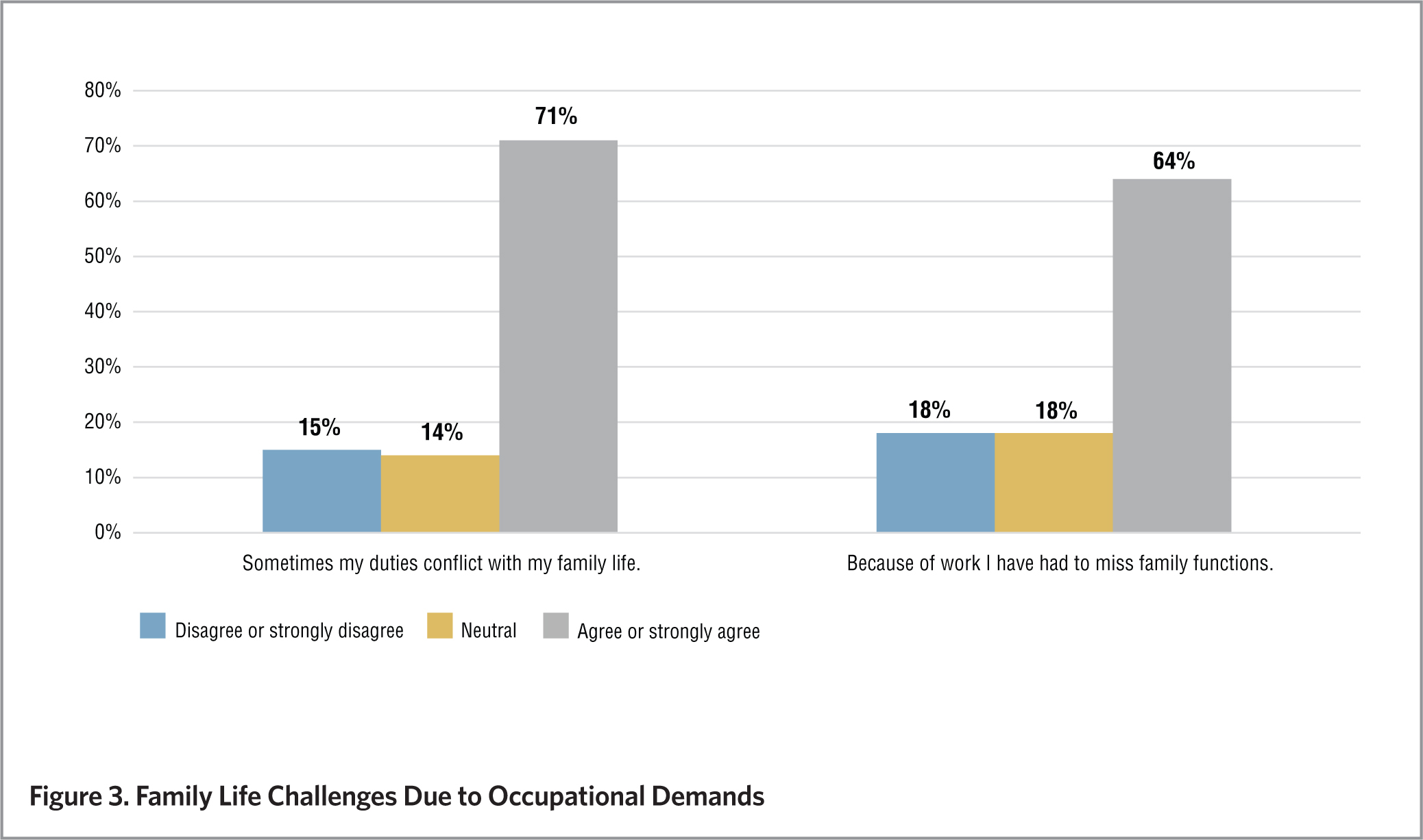 Many single CAF parents are thriving, but the work–family conflict remains a considerable concern for some. A qualitative study participant expressed:

“I’m mainly concerned that being in the Canadian Forces may throw something unexpected at me, where I will be left in a position to choose between my career or my children.”

Single CAF parents could benefit from an increased awareness of, and access to, family assistance programs (e.g., Family Care Plans) and other programs, including counselling services. Furthermore, increasing awareness among managers and leaders about the work–family conflict challenges of single CAF parents could foster a more flexible and accommodating work environment. Finally, the ability of these parents to manage work and family responsibilities could be enhanced by tailoring programs and services to single parents (e.g., support groups) in order to increase emotional and instrumental support.

Although this research examines the main challenges and work–family conflict among single-parent CAF families, this is only a first step toward a full understanding of their well-being and unique needs. To further address the current gaps in knowledge, DGMPRA has developed a comprehensive research program related to military families, collaborating extensively with academia (e.g., via Canadian Institute for Military and Veteran Health Research). This body of research seeks to enhance the lives of Canadian military personnel, Veterans and their families. Supporting families is codified in the Canadian Forces Family Covenant, which acknowledges the immutable relationship between the state of military families and the CAF operational capacity.

We recognize the important role families play in enabling the operational effectiveness of the Canadian Forces and we acknowledge the unique nature of military life. We honour the inherent resilience of families and we pay tribute to the sacrifices of families made in support of Canada…

Consistent with the Family Covenant, it is important to continue developing the expert knowledge necessary to care for these families and to find ways to best meet their unique needs and ensure their individual and family well-being.

Dr. Alla Skomorovsky is a research psychologist at Director General Military Personnel Research and Analysis (DGMPRA), where she is a leader of the Military Families Research team. She conducts quantitative and qualitative research in the areas of resilience, stress, coping, personality and well-being of military families.

Dr. Skomorovsky received the inaugural Colonel Russell Mann Award for her research on work–family conflict and well-being among CAF parents at Forum 2015 – an event hosted by the Canadian Institute for Military and Veteran Health Research.

This article can be downloaded in PDF format by clicking here.