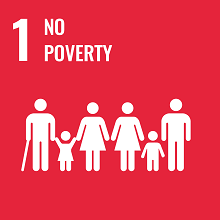 Poverty is an issue that affects families across Canada and around the world. When families lack sufficient resources to sustain themselves and support their well-being, it affects everyone in the household and can have an impact on community well-being.

Poverty has many faces and can be manifested in diverse ways, including hunger and malnutrition, limited access to education and other basic services, social discrimination and exclusion, as well as a lack of participation in decision making. As with many measures of well-being, poverty is disproportionately experienced by marginalized groups, such as people living with disabilities, Indigenous families, single parents and racialized communities.

SDG 1 aims to end poverty – in all its forms – everywhere. It’s a broad and ambitious goal, but truly sustainable development that “leaves no one behind” means facing the unmet needs and inequalities experienced by all families in Canada and around the world.