In a pandemic, as in life in general, women and men often have different experiences and behaviours. According to three weeks of survey data1 from the Vanier Institute of the Family, the Association for Canadian Studies and Leger, a higher proportion of women than men view the COVID-19 pandemic as a threat and have experienced physical, emotional and social impacts as a result of social distancing and home isolation.

Women are more likely to view coronavirus as a threat but, over time, differences are converging

Women generally view COVID-19 as a bigger threat than men with regard to its impact on society. In the most recent cycle of the survey, conducted from April 3 to 5, 2020, a higher share of women than men say they perceive that the virus is a threat to the Canadian economy (94% vs. 91%), a threat to day-to-day life in their community (81% vs. 75%) and a threat to the health of the population as a whole (83% vs. 74%). Equal shares of women and men (53%) say in that COVID-19 is a threat to their personal financial situation.

When it comes to personal impacts on health,* too, women tend to express greater concern. Nearly seven in 10 (68%) of women aged 18 and older report that they are “very afraid” or “somewhat afraid” of contracting the coronavirus themselves, compared with 63% of men (fig. 1). Eight in 10 (80%) women are afraid that a family member will become sick compared with 73% of men.

When asked if they felt that the worst of the crisis was behind us, was now, or was yet to come, 69% of women say they feel that the worst is yet to come, compared with 64% of men. At the other end of the spectrum, 11% of women and 18% of men say they feel that the virus is not a real threat and is being “blown out of proportion”*; nevertheless, data for women and men over the past three weeks suggest that over time, these gaps have been converging (figs. 1 and 2). 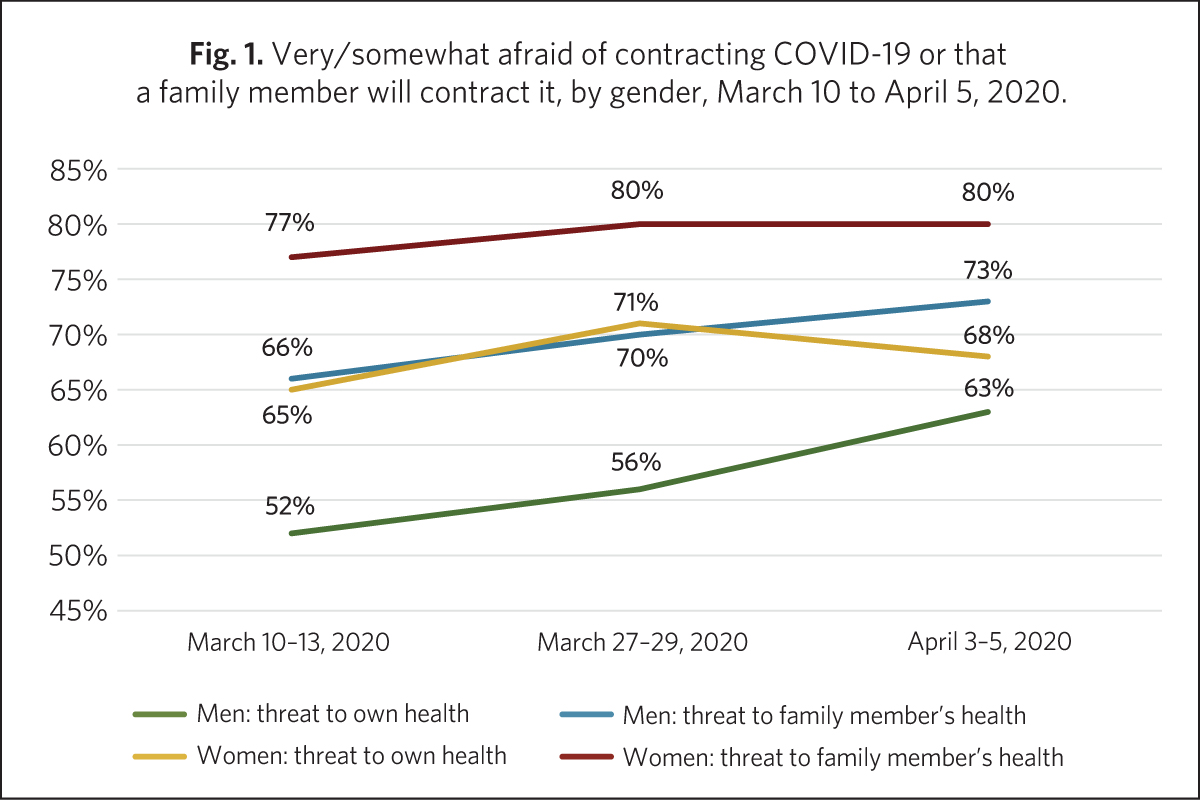 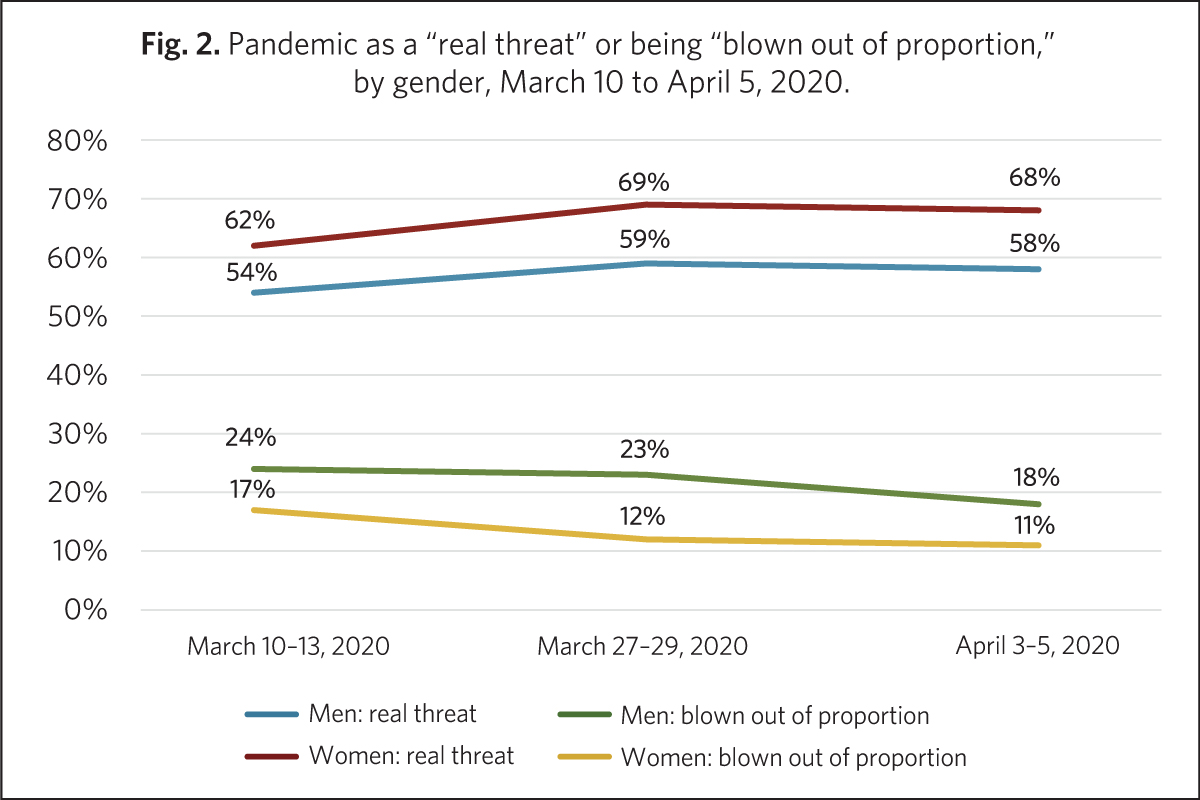 Data show that women and men in Canada have been working diligently to flatten the COVID-19 curve. Nearly 9 in 10 of women and men say that they practise social distancing, keep a safe distance of 2 metres away from other people, wash their hands more frequently than usual and only go out for necessities (fig. 3).

Little difference was found between women and men regarding reported shopping activities over the past week. Women are slightly less likely to have gone grocery shopping (69% vs. 72%), to a liquor store (13% vs. 17%) or to get take-out food from a restaurant (20% vs. 22%). However, there are bigger gaps in the shares of women and men who have been to a convenience store in the past 7 days (15% vs. 22%). 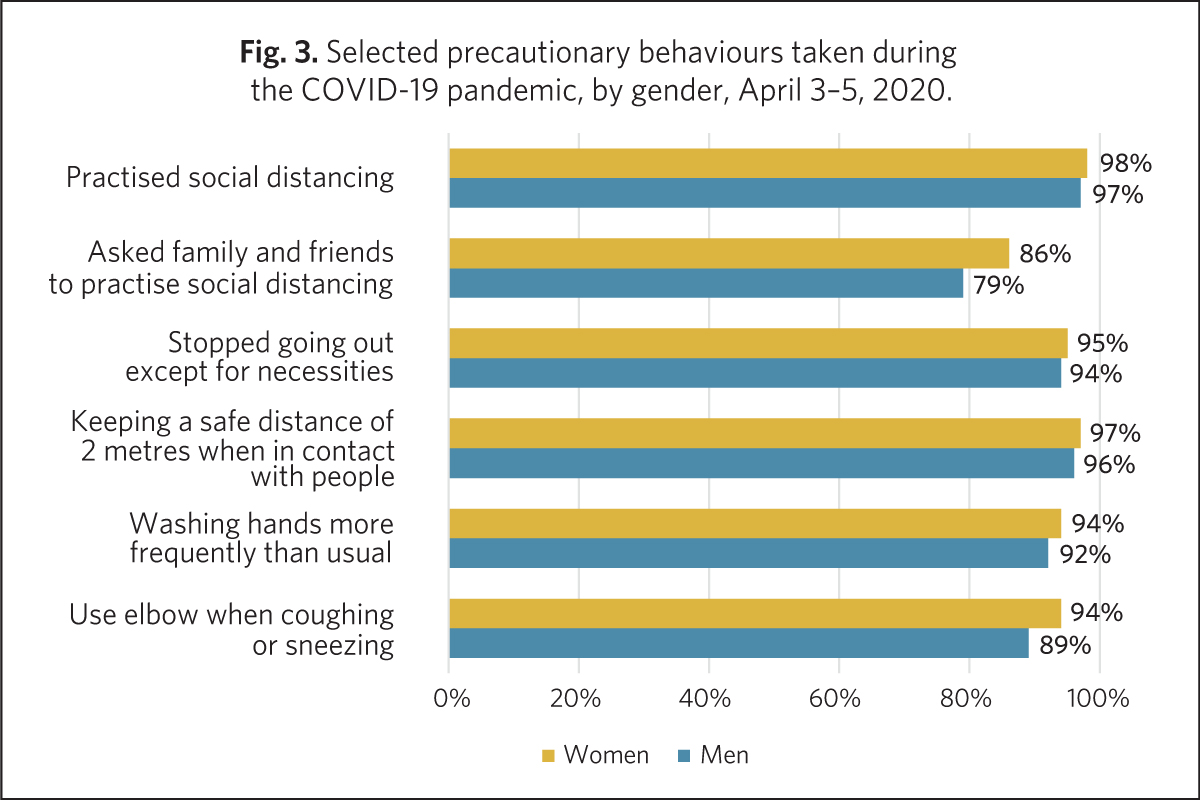 On the other hand, men – particularly younger men – are more likely to visit to friends and family during the COVID-19 pandemic: 30% of men aged 18–34 say they have visited friends or family since the start of the coronavirus crisis, more than double the share (14%) of women in the same age group and about four times the share of men aged 55 and older (8%) and women aged 55 and older (6%) (fig. 5). 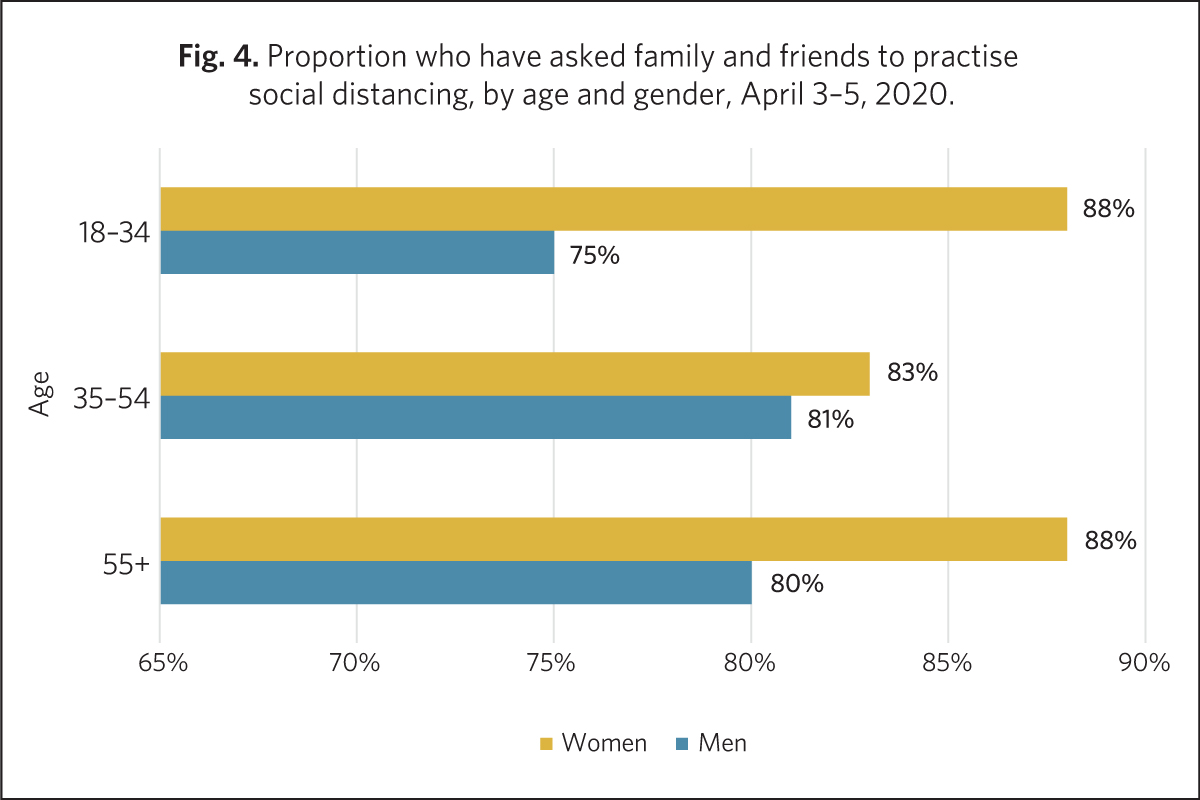 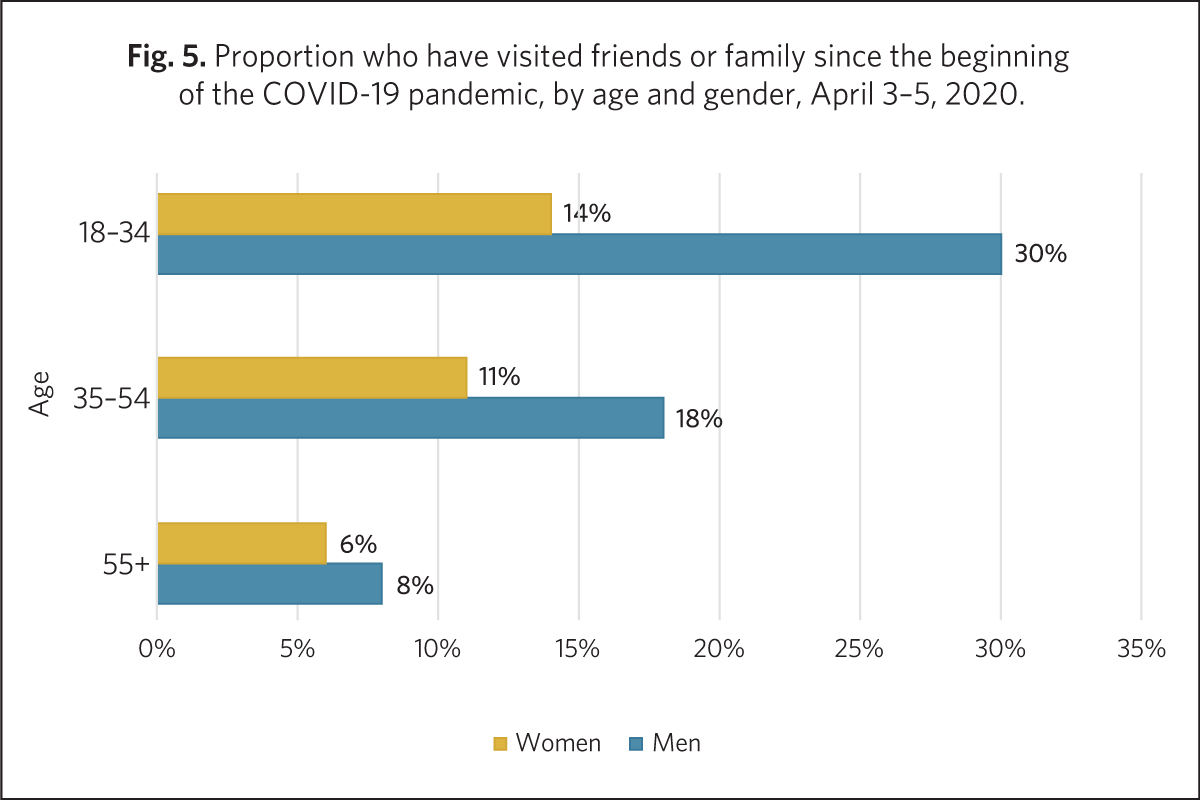 Almost three-quarters of women in Canada (74%) are satisfied with the measures put in place to fight COVID-19 by the federal government, and 84% with measures put in place provincially, according to the April 3–5, 2020 survey results. This compares with 69% and 79% of men, and revealing a similar gender gap found in the March 10–13 cycle of the survey.

Women also more commonly report that they agree with potentially stricture measures which could be put in place to contain the COVID-19 pandemic. As of April 3–5, 7 in 10 (68%) of women totally agree that they would give permission for police officers to issue fines to citizens who do not respect the measures put in place, compared with 62% of men, and 49% of women and 46% of men would allow police to arrest people. If it came to a complete city quarantine, 43% of women say that they would totally agree with that measure, compared with 36% of men.

Women are more likely than men to say that they have “very often” or “often” felt anxiety or nervousness, sadness, irritability or difficulty sleeping since the beginning of the COVID-19 pandemic. In fact, it is on these indicators where the greatest gender differences appear in the April 3–5 survey, with a 9- to 15-percentage point larger share of women compared to men reporting these experiences. (fig. 6). 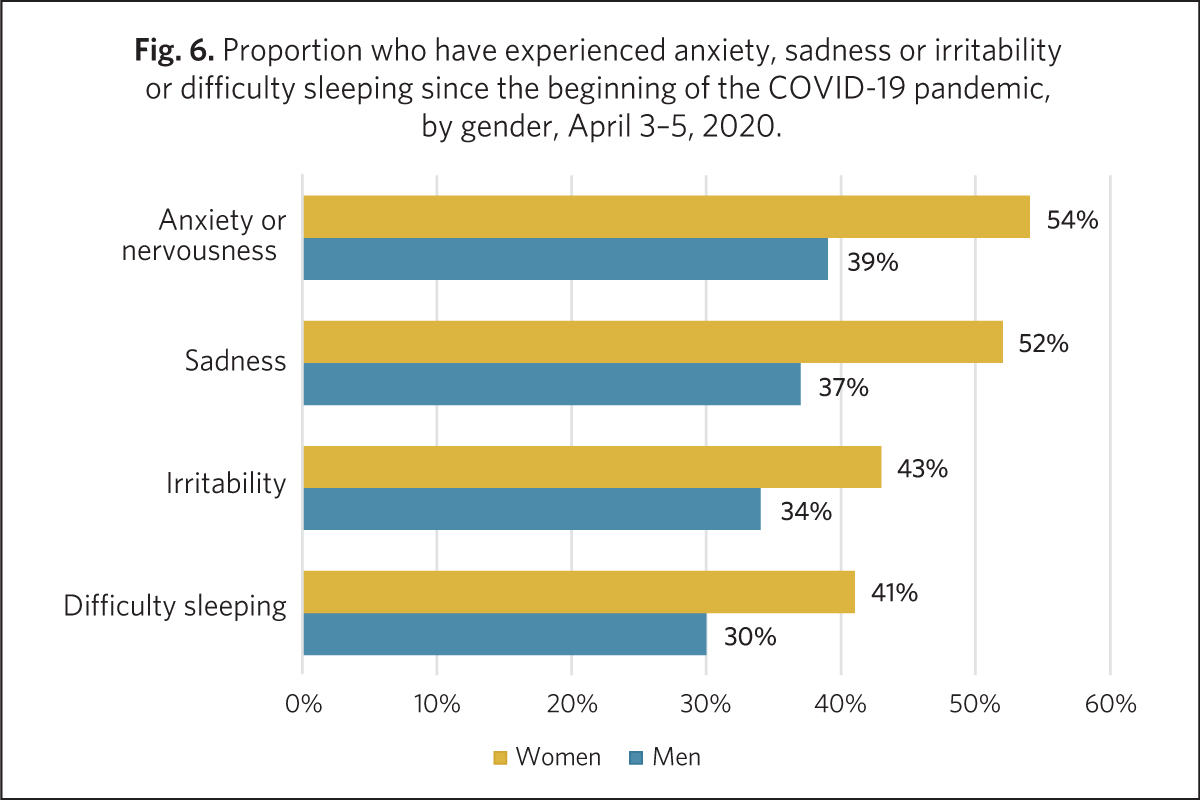 Despite some gender differences in feelings and responses to the COVID-19 pandemic, women and men report in equal shares that they are managing life better (7%), about the same (65%) or worse (25% to 26%) than they were before the pandemic.

Interestingly, though, a higher share of men who are in a married or common law relationship say that the COVID-19 pandemic has brought them closer to their spouse (49%) and/or resulted in more meaningful conversations (52%), compared with women (41% and 49%).

1. The survey, conducted March 10–13, March 27–29 and April 3–5, 2020, included approximately 1,500 individuals aged 18 and older, interviewed using computer-assisted web-interviewing technology in a web-based survey. The March 27–29 and April 3–5 samples also included booster samples of approximately 500 immigrants. Using data from the 2016 Census, results were weighted according to gender, age, mother tongue, region, education level and presence of children in the household in order to ensure a representative sample of the population. No margin of error can be associated with a non-probability sample (web panel, in this case). However, for comparative purposes, a probability sample of 1,512 respondents would have a margin of error of ±2.52%, 19 times out of 20.

*Data on threats related to their own health, threats to the health of a family member and whether or not the virus is a real threat or being blown out of proportion exclude women and men who reported that they or a family member already has/had the virus or who answered “Don’t know” when asked the relevant threat question. (These people were included in the data for other survey questions examined in this report.)