“During the final months of the Second World War, a soldier once said of Georges Vanier that meeting him ‘[made him]  feel proud just to be a Canadian.’ The story of the Vaniers is, in a sense, the story of the best that Canada can offer, and it, too, should make Canadians proud.”1 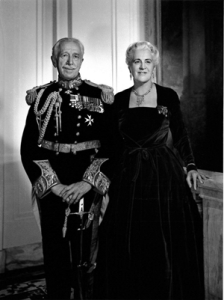 Every family has its own unique history, and the same is true of the Vanier Institute of the Family, which has now been studying families and family life across Canada for more than 50 years. The Institute was founded by then-Governor General Georges P. Vanier and Madame Pauline Vanier at a time of widespread social, economic and cultural change – a context in which they felt it was vital for Canadians to understand the importance of family to society. General Vanier was a devoted man of many passions and a prominent figure in both the history of the Institute and of Canada as a whole.

Georges Vanier was born in Montreal on April 23, 1888, into a devout, middle-class household led by Philias and Margaret Vanier. He grew up in a mostly English-speaking home but became enamoured with his French heritage in his youth, later perfecting his French through his studies. A deeply committed Catholic, he would eventually earn a degree in church devotional fellowship. Outside his theological life, he was a passionate hockey fan who enjoyed the arts, and he wrote plays and poetry in his youth.

Following the outbreak of the First World War, Georges Vanier dutifully joined the military, where he was instrumental in organizing the first battalion of French-Canadian soldiers, the Royal 22e Régiment (also known as the “Van Doos”). He earned many honours during his service, including the Military Cross, the Cross of the Legion of Honour, the 1914–15 Star, the British War Medal, the Victory Medal and a Distinguished Service Order.

After the war, he met Pauline Archer while having tea at Montreal’s Ritz-Carlton Hotel. The two married in 1921 and raised a family of five children – Thérèse, Georges, Bernard, Jean and Michel – with whom he would regularly spend time at their Laurentian cottage with extended family. After being promoted to Major-General in 1942, he served in several diplomatic roles, eventually becoming Canada’s first ambassador to France in 1944, where he contributed to post-war efforts.

Following his retirement from his diplomatic role, General Vanier’s deep sense of commitment to his country continued. In 1959, he became the first Quebec native to be appointed Governor General of Canada (1959–1967), when he fought for unity in a time of national crisis by promoting bilingualism during his many travels. Always committed to youth, General Vanier also served as Canada’s Chief Scout, and he created the Vanier Awards for Outstanding Young Canadians to recognize excellence and achievement.

An ardent believer in the importance of family to society, General Vanier convened the Canadian Conference on the Family at Rideau Hall in 1964 to mobilize knowledge about families and family life, and to guide future research. The Institute was created the following year to act as a “Royal Commission [that] will never be discharged.” Part of the Vaniers’ interest in family was rooted in their faith, but to maintain a spirit of inclusiveness and unbiased inquiry, they chose not to tie the Institute or its work to their particular religious beliefs. Since its founding, the Institute has continually worked as an independent and authoritative voice to enhance the national understanding of families and family life in Canada.

General and Madame Vanier were laid to rest in La Citadelle in Québec City, but their dedication to families continues through the Vanier Institute of the Family and its work. General Vanier was a man of many legacies, and his devotion to his country, its culture and the families that make it strong have served as a solid foundation for this organization over the past half-century – and will continue to do so in the years ahead.

Pauline Archer was born in Montreal on March 28, 1898, the only child to Charles and Thérèse Archer. Pauline grew up in a bilingual home amid nannies and maids. At age 8, she began her studies at the Convent of the Sacred Heart, but at age 11, she withdrew from formal schooling and was thereafter taught at home by governesses, learning French, English and Italian while also studying piano and singing. She was introduced to literature in her mid-teens and from there grew her love of knowledge. From an early age, she had a strong religious foundation and, at age 16, she started going on annual retreats to the convent of the Society of Marie Réparatrice. She even contemplated becoming a nun, but eventually decided against it, seeking other avenues for her desire to be of service.

During the First World War, Pauline enrolled in a nursing course and then worked at a military convalescent hospital until the end of the war. After the armistice, she joined a committee tasked with welcoming the returning soldiers and, through an acquaintance, she met Georges Vanier.

Pauline and Georges were married in 1921 and, over the next several years, Pauline accompanied her husband to his various posts in Geneva, London and Paris and became very involved in social causes. In 1940, as the Second World War began, she escaped from Paris with her four children, stopping on the way to help an enemy pilot who had crashed. When Paris was liberated in 1944, she, as a representative of the Canadian Red Cross, was the first diplomat’s wife to reach the city, where she helped refugees, set up welcoming centres and an information network as well as resources for the homeless. As a result of her dedication and compassion, Pauline was awarded the Légion d’Honneur by the French government for her charitable work.

After her husband’s death in 1967, Pauline moved back to Montreal and served as chancellor of the University of Ottawa, the first woman to do so. She later joined her son Jean in France at L’Arche, the international organization he founded for adults with developmental disabilities and their caregivers. She lived in France for 19 years, making yearly trips back to Canada in spite of increasing problems with her sight and hearing, and later died of intestinal cancer on March 23, 1991, just five days shy of her 93rd birthday, and was also buried at La Citadelle in Québec City.

The Vanier Institute of the Family

In 1965, Georges and Pauline Vanier founded the Vanier Institute of the Family, following the inaugural Canadian Conference on the Family in June 1964 at Rideau Hall.

“The Vanier Institute of the Family can be compared to a Royal Commission established to investigate and learn all there is to know about the families of Canada in a world of change. But since the need for knowledge and study will continue as long as we inhabit the globe, this Royal Commission will never be discharged.”2

Though Georges and Pauline were deeply committed to their faith and practice, they did not want the Vanier Institute of the Family to be tied to any religious group. Rather, as per the Institute’s original Letters Patent (1965), the purpose of the Institute was:

As a result of Georges and Pauline’s dedication to the welfare of families in Canada, the Vanier Institute of the Family continues to collaborate with organizations across Canada in order to understand families, family life, family experience, expectations and aspirations.
Photo: The portrait of Their Excellencies was taken in 1962 by world-renowned photographer Yousuf Karsh. ©Kitchener-Waterloo Art Gallery Collection. Gift of the Corporation of the City of Kitchener, 1980.