Home is at the heart of family life, where family relationships are formed and nurtured throughout the life cycle. It’s also where family resources – which include finances, food, living space and personal energy – are managed and where families provide care and support. Family resource management is an important factor in multi-generational households (those housing three or more generations), of which there were nearly 404,000 across Canada in 2016. These represented the fastest-growing household type between 2001 and 2016 (+37.5%), and they are home to 2.2 million people, or 6.3% of Canada’s population (up from 4% in 2001).

The manner in which these families share resources and their living space is shaped by the economic, demographic and social contexts in which they live. Exploring how the family home adapts and evolves can teach us about family relationships and family resiliency.

More seniors are living with their grandchildren

Intergenerational relationships are on the rise in Canada, with population aging and increased life expectancy giving different generations more time to build and strengthen bonds. According to Statistics Canada, 16.9% of the total population is now aged 65 years or older, outnumbering the under-15 age group for the first time in Canada’s history. Life expectancy at age 65 is currently at a record high of 21.9 years (87 years old) for women and 19.0 years (84 years old) for men.

Advances in home care, public transportation, assistive technologies and increased mobility have made it possible for more seniors and elders to decide where and how to live – and a growing number are now sharing a roof with their children and grandchildren.

Indigenous and immigrant families – both of which account for a growing share of Canada’s population – are more likely than others to live with grandma and grandpa, which is contributing to the increase in multi-generational households. Among Indigenous families, 11% of grandparents reporting an Aboriginal identity lived with their grandchildren in 2011 (14% of First Nations, 22% of Inuit and 5% of Métis grandparents). 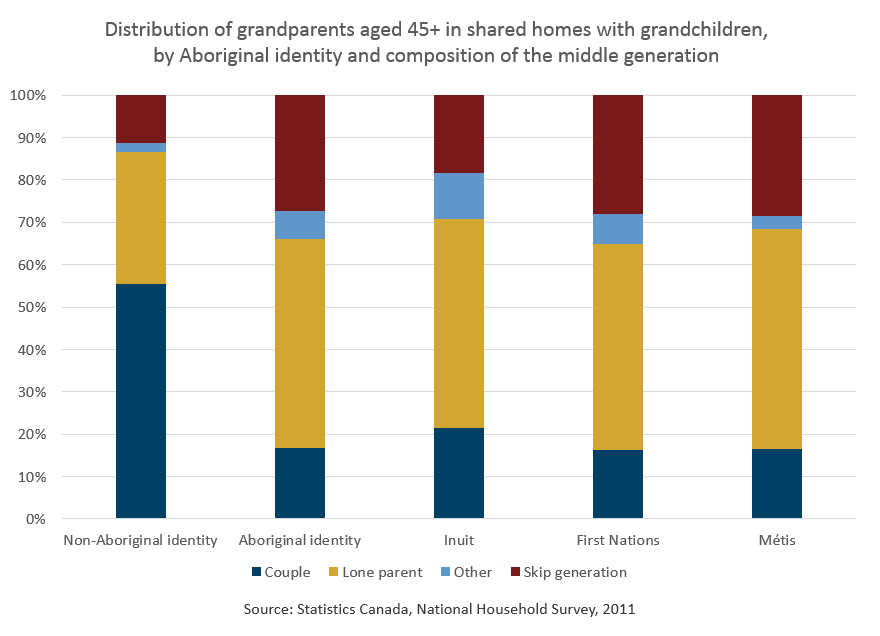 Immigrant families are also more likely to live in multi-generational households than their Canadian-born counterparts, a living arrangement that is often used as a financial management strategy for recent immigrants while they’re settling in to their new country. Analyses from Statistics Canada suggest that immigrants who arrived as children as well as second‑generation Canadians are more likely to live with a parent than those who were Canadians of the third or more generations. Whereas immigrants accounted for 26% of the overall population in Canada aged 45 and over in 2011, they accounted for more than one-half (54%) of all co-residing grandparents in 2011.

While only 2.9% of private households in Canada are (three-generation) multi-generational households, it’s important to note that this statistic doesn’t tell the full story. Not included in Statistics Canada’s definition of multi-generational households are those that consist solely of parents and their adult children, a two-generation living arrangement that has been steadily increasing for decades as youth have faced tough labour markets, increased student debt and rising life costs.

The proportion of young adults living in the parental home increased from 27% in 1981 to 42% for those aged 20–29. More recent data from the 2016 Census shows that many Canadians in their early thirties are also living with parents: during the 15-year period since 2001, the share of young adults aged 20–34 who were living with at least one parent increased from 31% to 35%, while those aged 30–34 grew from 11% to 14%. This societal shift has reduced some of the stigma associated with young adults living in their parental home, which can in turn contribute to this trend.

With a greater number of seniors living longer, growth in the number of Indigenous and immigrant families (who are more likely to live in multi-generational homes) and a greater number of young adults living in the parental home, multi-generational living will likely continue to grow in Canada. The high cost of housing also plays a role, with the average price of a home now more than $478,696 across the country, and reaching a high of $1,029,786 in Greater Vancouver.

Some families live in multi-generational households because it allows the younger generations to provide care for their senior relatives, who benefit from the company of loved ones in a familial setting. Regular company with family members can prevent social isolation among seniors, which research has shown can have wide-ranging detrimental effects on their health and well-being. This can be particularly important for widowed grandparents, who account for one-quarter of co-residing grandparents.

Sometimes the senior generation in multi-generational homes is the source of care and support, with many making significant contributions to family finances. More than half (50.3%) report at least some responsibility for household payments, with a much higher share contributing when there’s a lone-parent middle generation (75%), or if they live in skip-generation households (80%).

Many of the 600,000 grandparents who live with their grandchildren provide care for their grandchildren when the parents are at work, at school or running errands. This can have a significant impact on family finances, since child care costs can consume a significant portion of family income. This is particularly true for parents of infants, since infant child care spaces are not only the hardest to find, but also the most expensive, often exceeding $1,000 per month (with the exception of Quebec, which has much lower average costs due to its $7.75-per-day child care policy). According to a 2015 report from the Canadian Centre for Policy Alternatives, full-time infant care in Canadian cities were highest in Toronto, where median unsubsidized rates were more than $1,700 per month.

The middle generation in multi-generational households can face numerous overlapping stressors from caring for both parents and children, which has led to them being labelled the “sandwich generation” in the media. Cohabitation can help avoid or reduce some of the stress and costs that might otherwise result from providing care to a parent who lives out of town or in another province – so it is perhaps not surprising that nearly one-quarter (24%) of Canadians who provided care to their parents in 2012 lived with the care recipient(s).

Young adults in multi-generational homes give and receive support in diverse ways. A growing number provide care to family members with long-term health conditions, disabilities or age-related conditions. In 2012, 27% of the 15–29 age group provided care to family, with grandparents being the most common care recipient. But they help out in many other ways as well, such as with housework, errands and child care. In turn, living in the family home provides young adults with diverse forms of support as well, which can include room and board, meals and the use of facilities (e.g. laundry).

No matter its size, every home has limited space, and families are deploying creative solutions to share a home while respecting and maintaining the independence of all involved. Some have set up accessory dwelling units (ADUs) in their homes for their parents that have been designed for senior living, sometimes referred to as “granny flats” or “in-law suites.” The renovations involved in establishing these living spaces are often relatively minor and can allow seniors to live in homes with little need for assistance and reduced risk of injury.

Architects and homebuilders associations are taking note of the increase in multi-generational living. Floor plans and building designs targeted at multi-generational living have become a selling point for this growing market. Often, these designs incorporate a “home within a home” – that is, a full home with a separate, private apartment connected or embedded. Extra living spaces can have their own separate entrance or they can share one with the primary living space. Multi-generational homes sometimes feature open floor plans and wider doorways and hallways, which can allow for better traffic flow. Generally speaking, the more generations living under one roof, the more versatile the house has to be.

Multi-generational living can involve some tensions and challenges, but it can also benefit families, allowing for stronger intergenerational relations, diverse options for the management of family finances and household work. While it creates opportunities for care and support, multi-generational living is a complex, dynamic living arrangement that benefits from communication, respect and boundaries.

Multi-generational households aren’t a recent innovation. They were more common prior to the Second World War than they are today, so the recent increase in this living arrangement is not uncharted territory for families by any means. Like all shifts and trends in living arrangements over time, it demonstrates how families adapt and react to their ever-changing circumstances, and respond to the social and economic climate.

All references and source information can be found in the PDF version of this article.

© 2020 The Vanier Institute of the Family