Over the past few decades, couples in Canada have become increasingly diverse. One of the ways this diversity has been measured is by examining mixed unions – marital or common-law unions between two people who cross socially constructed boundaries between groups, such as racial and ethnic identity. This diversity is complex and dynamic, and reflects the larger diversity of Canadian society.

Since the Census of Canada does not collect information about race directly, past estimates of mixed unions have relied on classifying each partner’s visible minority status. Visible minorities are “persons, other than Aboriginal peoples, who are non-Caucasian in race or non-white in colour” (the status is irrespective of the person’s place of birth).1 In the Census questionnaire, respondents state whether they are or are not a visible minority, and select from the following categories: South Asian, Chinese, Black, Filipino, Latin American, Arab, Southeast Asian, West Asian, Korean, Japanese, Multiple visible minorities, Not a visible minority.2 In 2016, 22% of the population in Canada reported being a visible minority.

Importantly, this measure of visible minority was created for the Employment Equity Act with the purpose of providing equal opportunities in the workplace to specific designated groups, rather than to examine the experiences of racialized individuals in our society. It was never intended to measure diversity but it has been used, due to few alternative data sources available. The most recent Canadian census (2021) also used the concept of visible minority status, though Statistics Canada is exploring alternative ways of measuring population groups for future collection.

In addition to visible minority categories, another important aspect of the racial and ethnic diversity of couples is country of origin, which can determine or shape a person’s social norms and values, culture and language acquisition. Canadians reported 124 different countries as their place of birth in the 2016 Census. Immigration adds diversity to Canadian society at large and to families. Therefore, combining this with visible minority measures can add to our understanding of mixed unions and couple diversity more broadly.

Homogenous (similar) and heterogamous (mixed) unions can be measured in two ways: visible minority and country of origin. 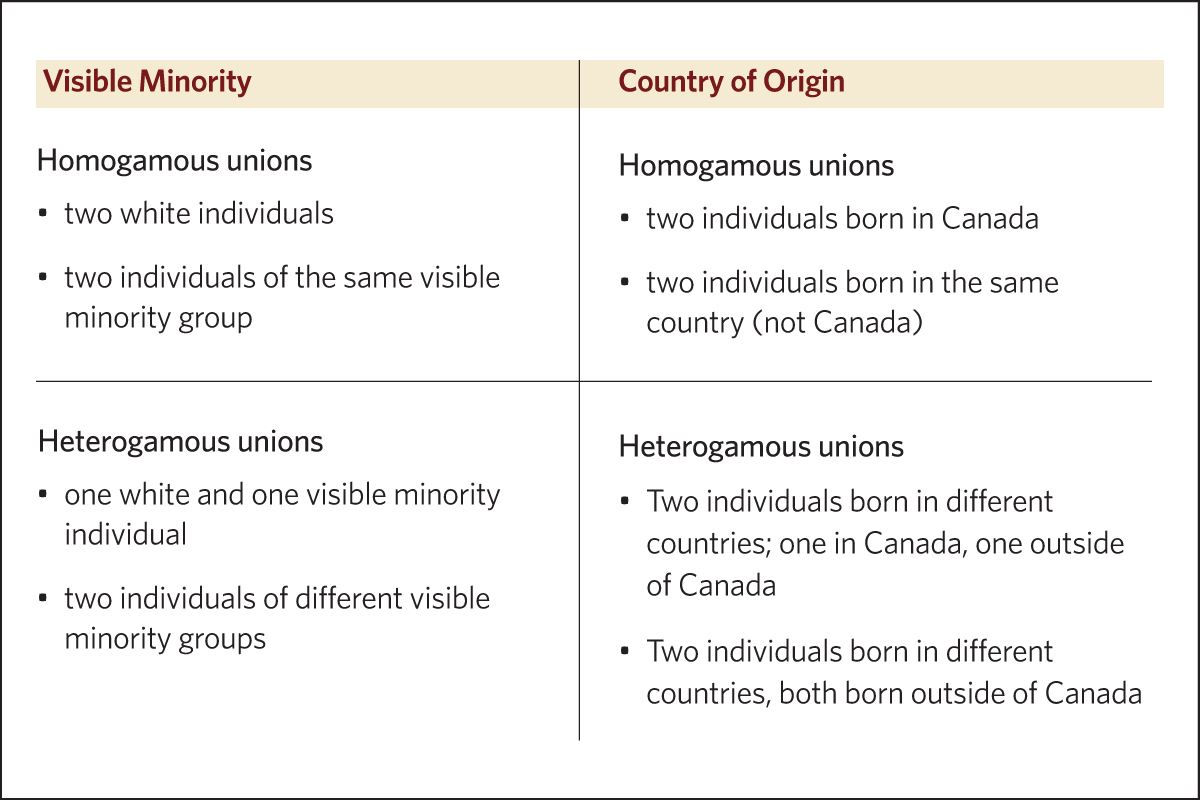 How common are mixed unions now? 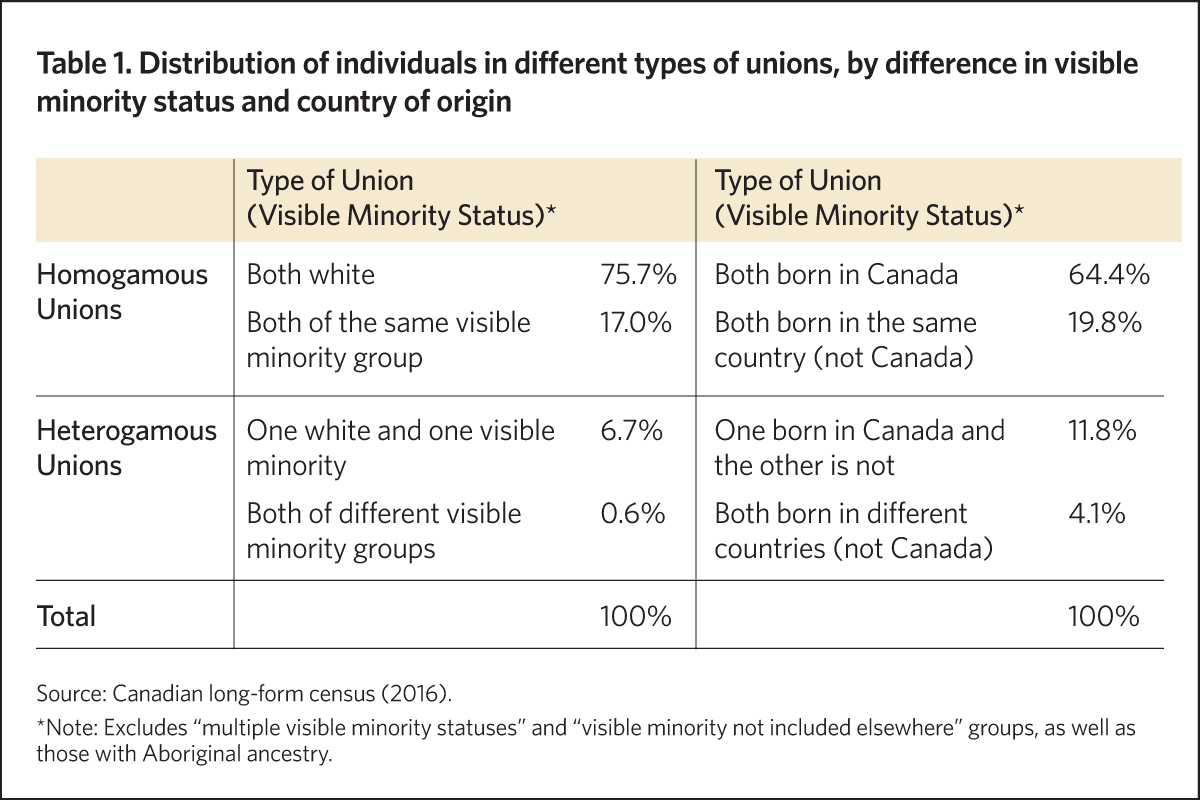 Homogamous white unions make up two-thirds of all married and common-law couples, as seen in Table 1. Among white couples, 20% are made up of a Canadian-born and foreign-born partner, and 13% of them are made up of partners born in different countries, outside of Canada (Figure 1).

Defining mixed unions is a complex and dynamic process

One study that reviewed the research on mixed unions argued that the criteria for identifying mixed unions can impact our understanding of how common they are.4 Instead, they write that “mixed” should be thought of as being on a continuum based on specific characteristics of interest, such as race and ethnicity.

Figure 1 illustrates the complexity of classifying mixed unions. Due to the limitations of how visible minority groups are classified and by only using that as the measure of diversity, some diverse unions are counted, and others are not.

Those who identify as white and are classified as “non-visible minorities” in the data are not a homogenous group. For example, an Italian-Greek couple may not have to navigate differences in racial identity but may have similar experiences in navigating cultural differences within the relationship as those in mixed unions across some visible minority groups.

The categorization of visible minority categories by the Employment Equity Act is also not straightforward. Although some categories refer to those living in Canada who immigrated or whose ancestors immigrated from a particular country (categories such as “Japanese” or “Filipino”), others refer to broader regions (categories such as “South Asian” or “Latin American”). This further demonstrates that these measures are just one way of capturing some of the ethnic and racial diversity within partnerships. 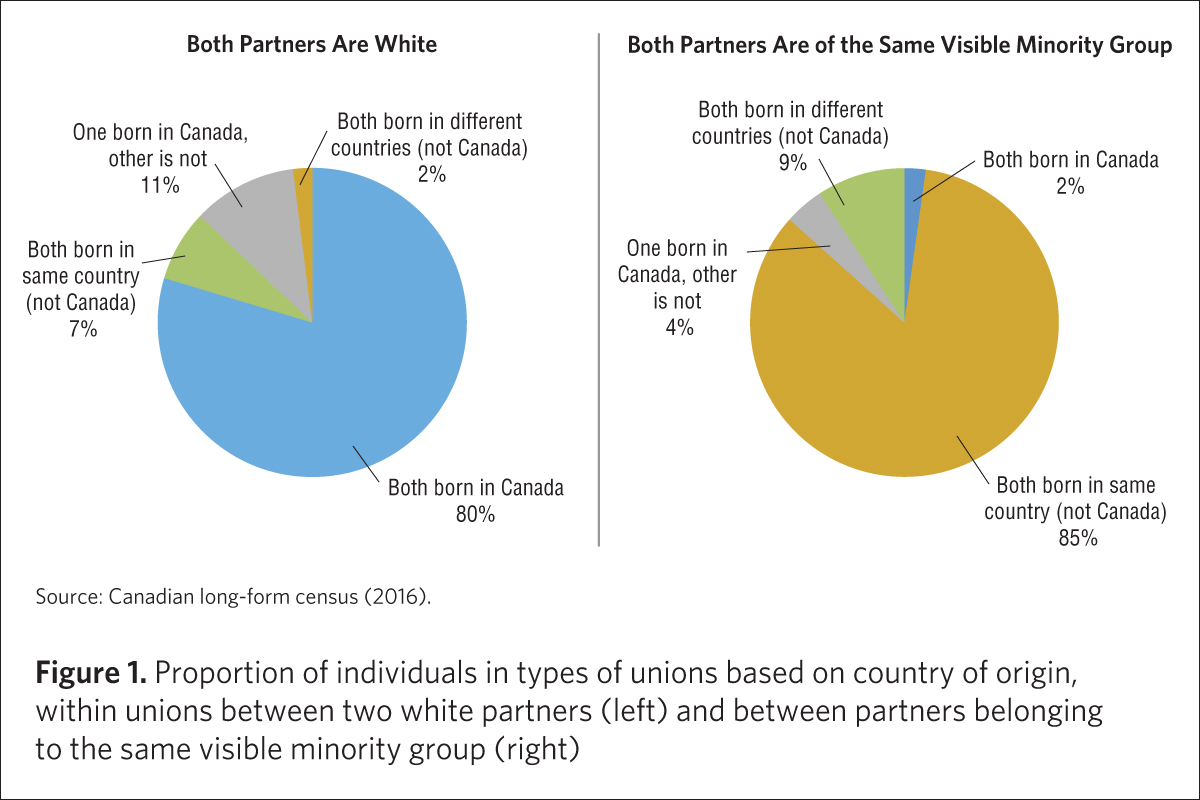 Mixed couples live in cities, have university degrees and have same-sex partners in higher proportions than their non-mixed counterparts by both measures.

In comparison with couples where both are white, higher proportions of mixed couples have university degrees (Table 2). Just over three-quarters of couples (76%) comprised of one white and one visible minority partner and 97% of couples made up of different visible minority group partners live in big cities, compared with 64% of couples where both are white. Moreover, a slightly larger percentage of mixed couples are also in same-sex unions compared with homogamous white couples.

The patterns are similar for mixed couples by country of origin (Table 3). In comparison with couples where both are born in Canada, a higher percentage of mixed couples have university degrees, live in big cities, and have same-sex partners. These patterns hold true even when the differences between these couples in age are taken into account. 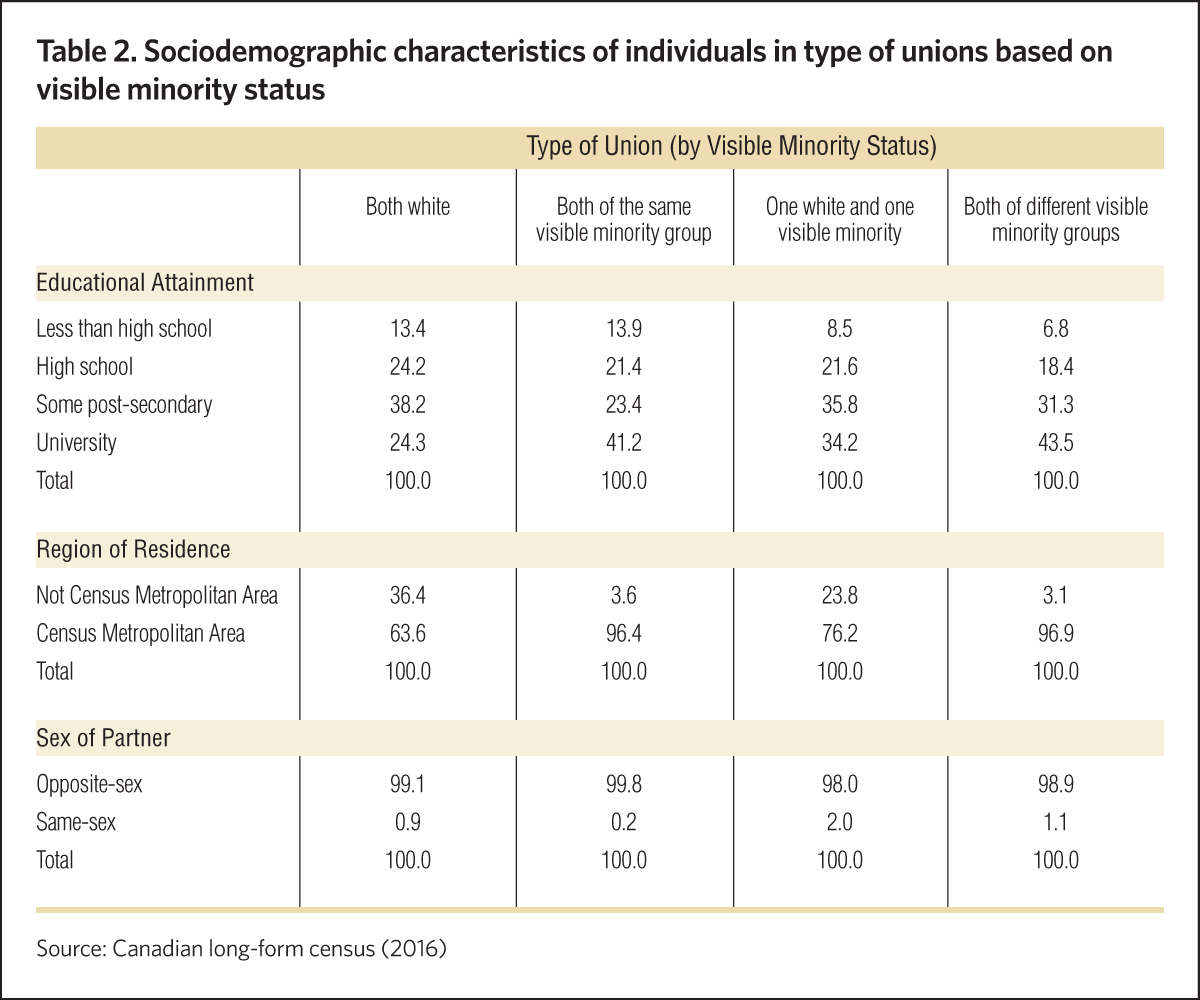 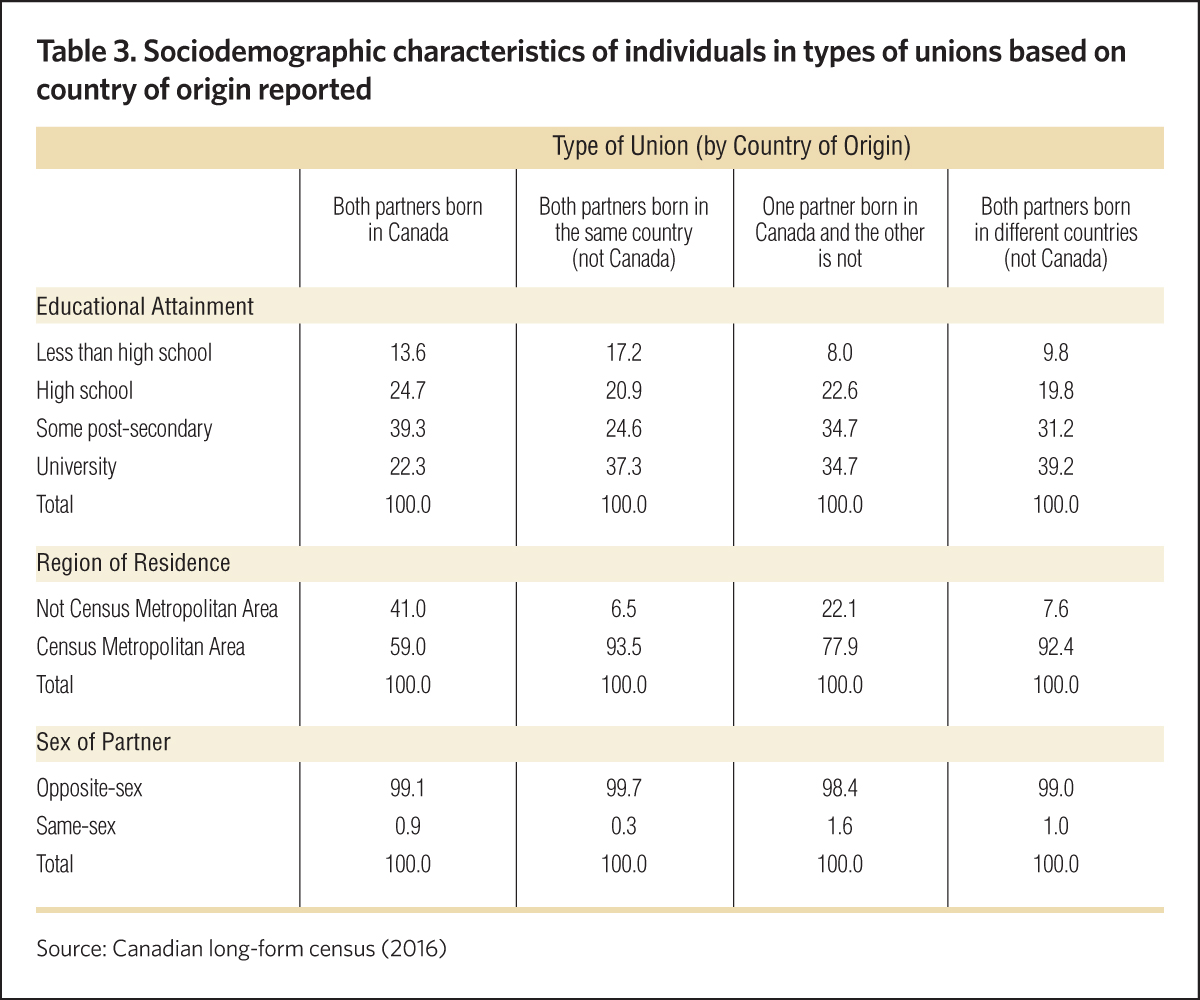 Possible explanations for these patterns include increasing physical and social opportunities to meet people of different backgrounds and changing preferences about who can marry whom. Certain subpopulations may experience more of those opportunities. Those who are urban, highly educated and in same-sex partnerships, for example, may have more access to integrated and diverse neighbourhoods, schools and workplaces.5 Song and Qian note the importance of examining class differences in who has access to these diverse spaces and partnering across ethnic and racial boundaries.6

Although the increase in mixed coupling on its own is not an indicator of social change or acceptance of minority groups, it is made possible by the increasing diversity in Canada.

Kathya Aathavan, MA, is a graduate from the department of sociology at the University of Western Ontario, interested in research on family, migration and demography.