Download In Conversation: Rachel Margolis on Divorce Trends in Canada

(February 10, 2020) Families in Canada have evolved considerably across generations, as have patterns of coupling (i.e. marriage, living common-law) and uncoupling (i.e. separation and divorce) that have an impact on families and family well-being. While a large and growing body of family research has documented how divorce can impact individuals and their families, our understanding of how this has changed over time has been significantly affected by a lack of publicly available vital statistics data in Canada over the past decade.

Rachel Margolis, PhD, Associate Professor in the Department of Sociology at the University of Western Ontario and panellist at the Families in Canada Conference 2019, joined Vanier Institute Communications Manager Nathan Battams to discuss Canada’s evolving data landscape in her recent study published in Demographic Research exploring recent divorce trends and the use of administrative data to fill the data gap on divorce.

Tell me about your recent study on divorce in Canada, and what made you interested in this topic…

This study, which was funded by the Social Sciences and Humanities Research Council of Canada (SSHRC) and the Canadian Institutes of Health Research (CIHR), addresses an issue I’ve been thinking about for a long time. While doing my research and teaching demography over the years, I’ve often been frustrated by the fact that we haven’t had national measures on marriage and divorce in Canada since 2008, when vital statistics data stopped being analyzed and reported by Statistics Canada. My collaborators Youjin Choi, Feng Hou and Michael Haan all worked on this project with me to learn about recent changes in divorce.

The real motivation for this study was to strengthen our understanding of demographic changes in Canada.

This is important because marriage and divorce data provide important and unique measures for studying families and family life. It matters for understanding fertility trends, since formal unions are the context in which most babies are born. It matters for understanding family finances, since formal unions are vehicles for wealth accumulation, and they can tell us a lot about family resources and provisions, such as housing and caregiving. The real motivation for this study was to strengthen our understanding of demographic changes in Canada.

Historically, information on marriage and divorce in Canada has been collected and managed by a system called Vital Statistics. Vital statistics exist in most countries in some form as the means of collecting population data on things like marriage, divorce, births and deaths, although some countries have recently moved away from this mode of data collection and are exploring alternate strategies. In the United States, the National Center for Health Statistics (NCHS) discontinued divorce and marriage statistics in 1996, as it was argued that similar data could be collected more easily and inexpensively through surveys, which are now used to gather information about marriage and divorce rates.

And while we haven’t had data published by Statistics Canada on marriage and divorce trends since 2008, there hasn’t been any alternative data source in place, like there is in the U.S. The decision to stop publishing these data was made for a variety of reasons, including fiscal constraints, some problems with data compatibility across provinces and territories, and a reported underutilization of these data online. But with no alternative data source, there has since been a decade-long data gap on marriage and divorce in Canada.

The first data gap this study sought to address was whether other types of data can fill this gap. Though some researchers have already used administrative data to look at the effects of changes in marital status on other outcomes, we haven‘t really assessed the quality of these divorce measures.1

Second, there has been no national data on how the divorce rate in Canada has changed since vital statistics data collection ceased in 2008. Since then, research on divorce in Canada has relied on information about the current marital or conjugal status of individuals, which doesn’t provide divorce rates. The latter are important to track because they tell us a lot about how things are changing over time. Current marital status is not an effective indicator of divorce because many people who divorce later repartner and/or remarry. Our study used anonymized administrative data from tax records to estimate the divorce rate – the first to do so.

A third gap is that we don’t have information on the changing age patterns of divorce in Canada since 2008. We do know that there are significant shifts taking place in comparable countries, such as the United States, and in Europe. In the U.S., we know that divorce rates among those aged 50 and older – often referred to as “grey divorce” – doubled in the 1990s and 2000s. There are a lot of reasons for this, but many of the same trends happening among baby boomers in the U.S. are likely happening to boomers in Canada as well. But, with no data, we don’t really know whether there’s also been a “grey divorce revolution” in Canada.

What did you find in your study on divorce in Canada?

First of all, we found that the divorce rate in Canada can indeed be measured somewhat well with administrative data, when comparing it with vital statistics data before 2008. When we extrapolate after 2008 with this approach, we see a decline in the annual divorce rate between 2009 and 2016. The annual divorce rate was about 10 divorces per 1,000 married women in the early 2000s and this declined starting in 2006, reaching 6 divorces per 1,000 married women in 2016.

Fewer people are getting married and those that do get married are more likely to be from groups with lower divorce rates.

Third, there have been changes in divorce rates for both younger and older Canadians. Divorce rates among adults in their 20s and 30s fell by about 30% in the last decade. Research from other countries helps explain this, as fewer people are getting married and those that do get married are more likely to be from groups with lower divorce rates (highly educated with lots of resources), and they are therefore less likely to get divorced while in this age group, and those who do are in potentially higher quality marriages than they were in the past.2 Even though age-specific divorce rates are highest for younger women, they’ve been declining over the period of our analysis.

Divorce rates for older people in Canada have increased slightly through the 1990s and 2000s, but nothing as significant as the “grey divorce revolution” in the U.S. 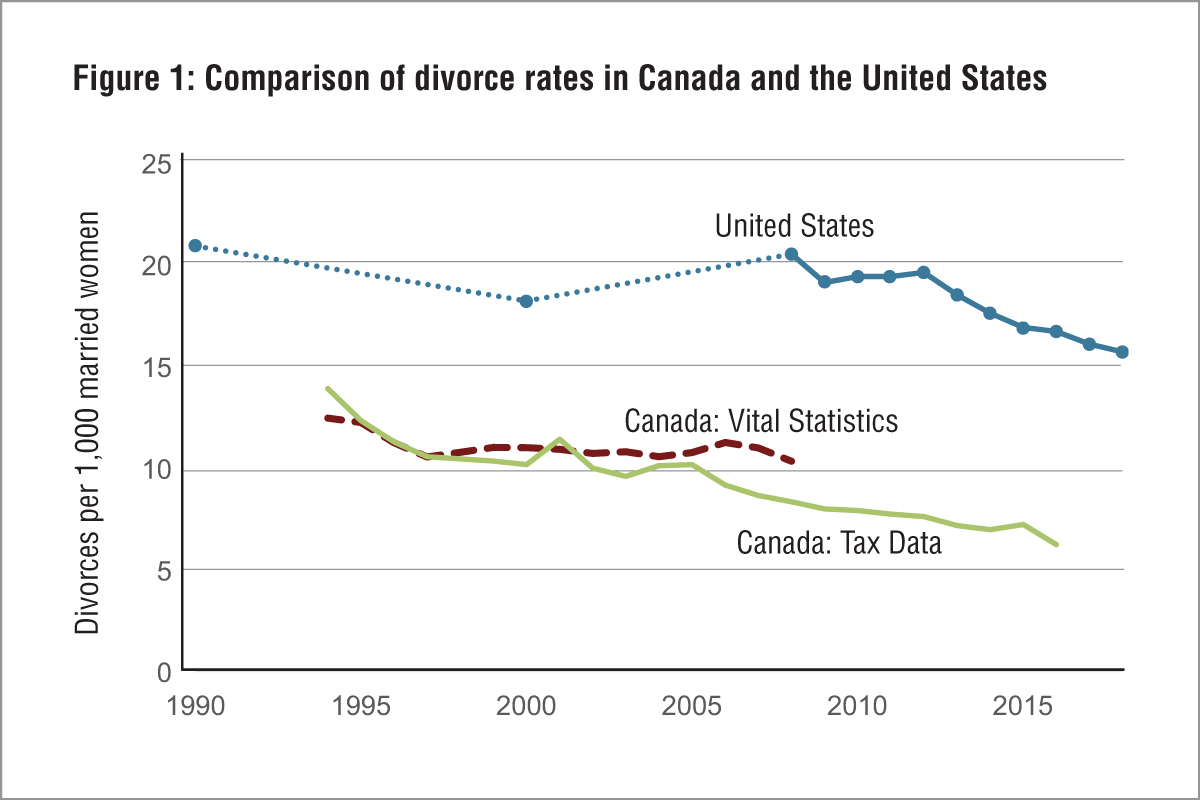 Overall, we found that using tax data provided invaluable insights into recent trends in divorce in Canada and helps inform whether administrative data can be used to fill the data gap on divorce. However, we also found important caveats regarding data quality in recent years, as coverage rates of divorced people in the tax data has declined to some degree (i.e. divorces have been undercounted in tax data relative to vital statistics). This is potentially problematic, because it could lead us to increasingly underestimate divorce in the tax data over time, and it could become unclear how much of a decline in divorce in recent years is due to a decline in data quality.

Looking ahead, as a family researcher, how would you complete the phrase “Wouldn’t it be great if…”

To address data gaps, there’s been a growing focus in Canada and other countries to use administrative data rather than survey data to learn about the population. There are many reasons for this and it’s not necessarily a bad thing, but we have to be careful about different issues that arise with data quality – and that’s what we found when we used tax data to look at divorce trends.

In wanting to address this, I would say, “Wouldn’t it be great if we could add questions about marriage and divorce in the last year to a large annual survey in Canada with a known high response rate?” A survey with a large enough sample size, such as Statistics Canada’s Labour Force Survey or the long-form census, could serve as an efficient and reliable vehicle for collecting these important data.

We can also learn from our neighbours to the south, who added questions about recent changes in marital status to the American Community Survey in 2008. This could provide answers to how marriage and divorce are changing and how the percentage of marriages that will end in divorce is changing over time – invaluable insights for researchers, policy makers, service providers and others with an interest in families in Canada.

Rachel Margolis, PhD, is an Associate Professor in the Department of Sociology at the University of Western Ontario and a Vanier Institute of the Family contributor.

Nathan Battams is Communications Manager at the Vanier Institute of the Family.