Canada’s lockdown for the COVID-19 pandemic has placed heavy restrictions on individuals and businesses, which have altered many commonplace activities, from preparing and consuming foods to shopping, exercising and spending time outdoors. The health of adults in Canada is changing, and not just because of the virus, but also because of pre-existing and newly emerging health habits.

Throughout this period of social isolation, adults are spending more time preparing meals and drinking alcohol at home, but spending less time exercising and going outside, according to four weeks of recent survey data from the Vanier Institute of the Family, the Association for Canadian Studies and Leger1 and other pandemic data sources.

These patterns will be important to watch throughout the duration of the pandemic, given the potential impacts on both physical and mental health among families across the country.

Healthy eating is fundamental to good health, is a key element in healthy human development and is important in reducing the risk of many chronic diseases. Preparing and cooking food at home can reduce the amount of sodium, sugar and saturated fat in meals while at the same time increasing the intake of vegetables, fruit, whole grains and plant-based proteins. On the other hand, eating out or ordering in can negatively impact a person’s health because of the potential for the meals to be more highly processed, with lower quantities of vegetables, fruits and whole grain foods.2 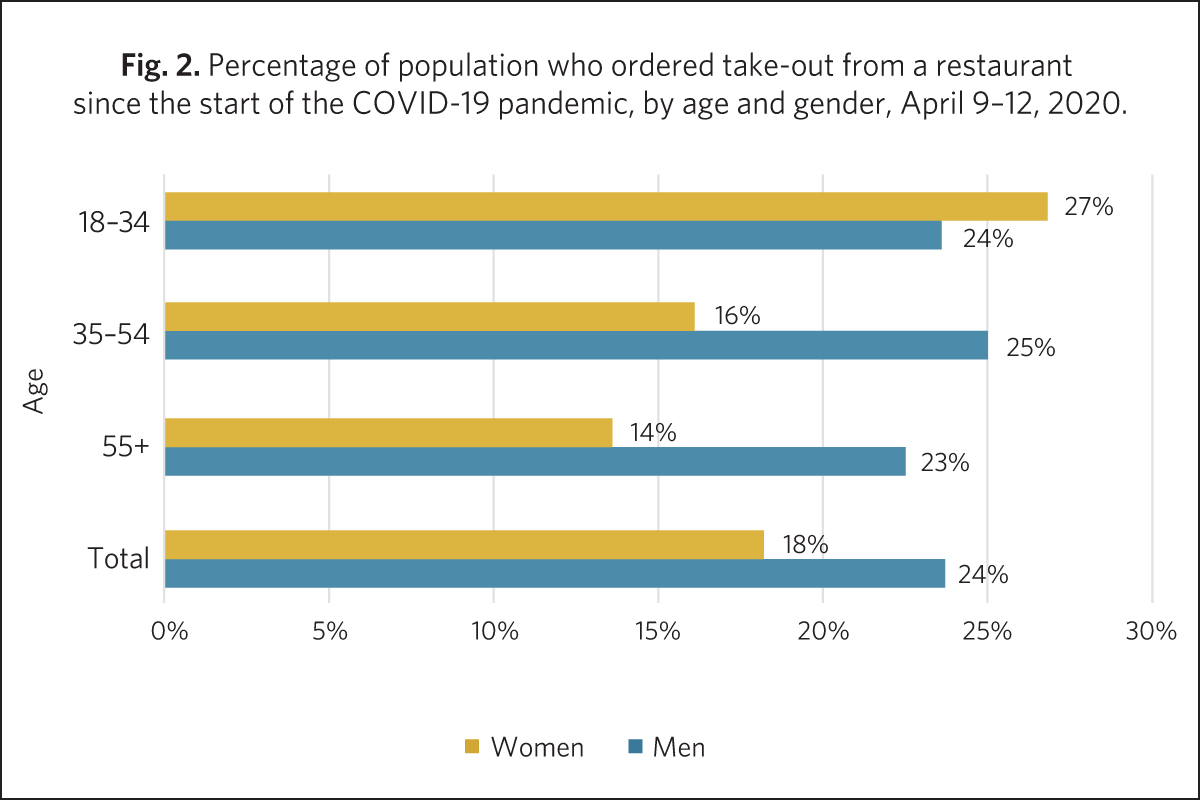 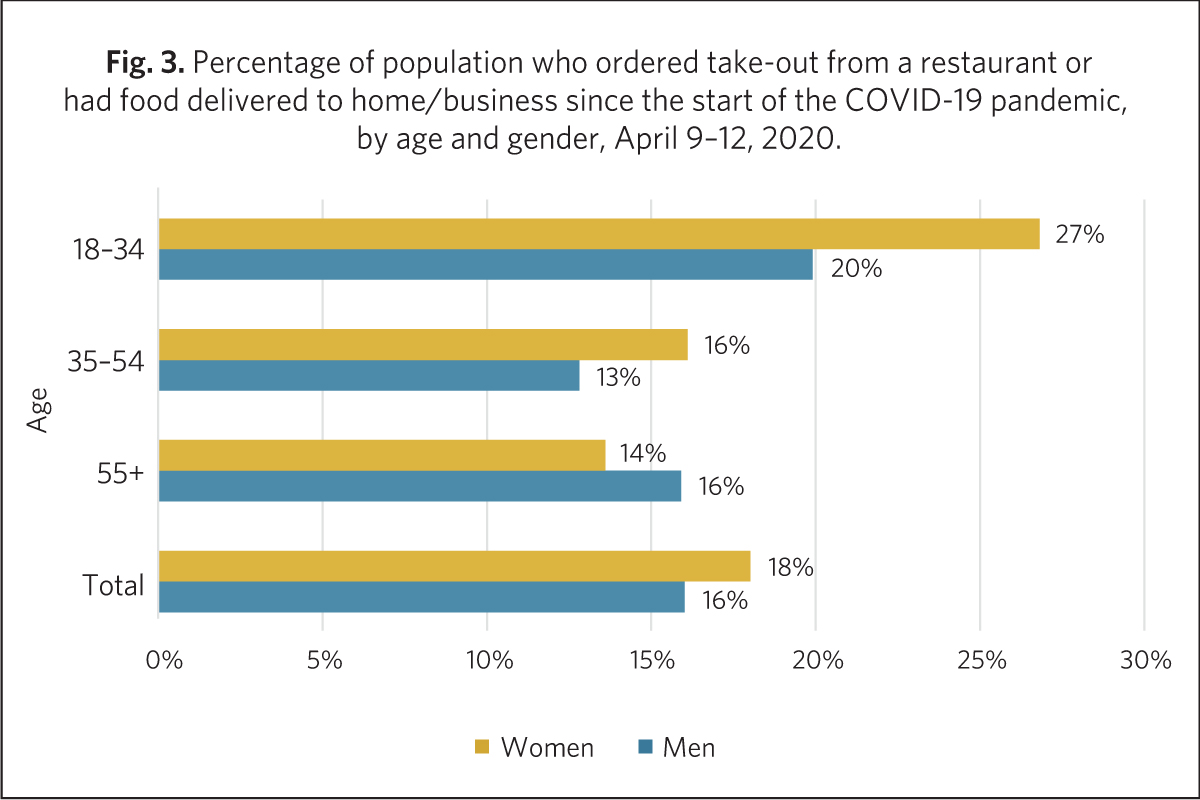 One in 5 adults are drinking more alcohol at home

Alcohol can have significant consequences for physical and mental health if consumed in large quantities, by exacerbating pre-existing mental health issues, increasing the short-term risk of injury or acute illness, and increasing the long-term risk of serious diseases like liver disease and some cancers.3 Accordingly, if alcohol consumption goes up during the coronavirus crisis, there could be significant post-pandemic impacts on individual and family health and on the health care system in Canada.

A survey by Statistics Canada carried out March 29–April 3 found that 20% of Canadians aged 15–49 are drinking more at home during the COVID-19 pandemic than they were before it started.4 Similarly, a March 30–April 2 poll by Nanos/Canadian Centre on Substance Use and Addiction found that 21% of adults aged 18–34 and 25% of those aged 35–54 have started drinking more at home since the start of the COVID-19 crisis.5

Respondents to the Nanos poll who report staying home more and consuming more alcohol say that their drinking has increased most often because of the lack of a regular schedule (51%), boredom (49%), stress (44%) and/or loneliness (19%).

According to data collected April 9–12 by the Vanier Institute of the Family, the Association for Canadian Studies and Leger, 14% of adults had gone to a liquor store in the previous week, with more men (18%) having done so than women (11%).

Nearly 4 in 10 are exercising less often

On the contrary, nearly 4 in 10 women (38%) and 33% of men say as of April 9–12 that they are exercising “less often” now than they were before pandemic. People living in Quebec (42%) most commonly report a decrease in their frequency of exercise as compared with those in the other provinces.

Notably, it appears that younger families may be spending more time exercising. A greater share of adults who live with children (23%) report they are exercising more often since the pandemic began compared with those who were not living with children (18%) (fig. 4). Additionally, nearly 3 in 10 adults aged 18–34 (28%) say that they were exercising more often since the start of the crisis compared with 14% of adults 55 years and older. 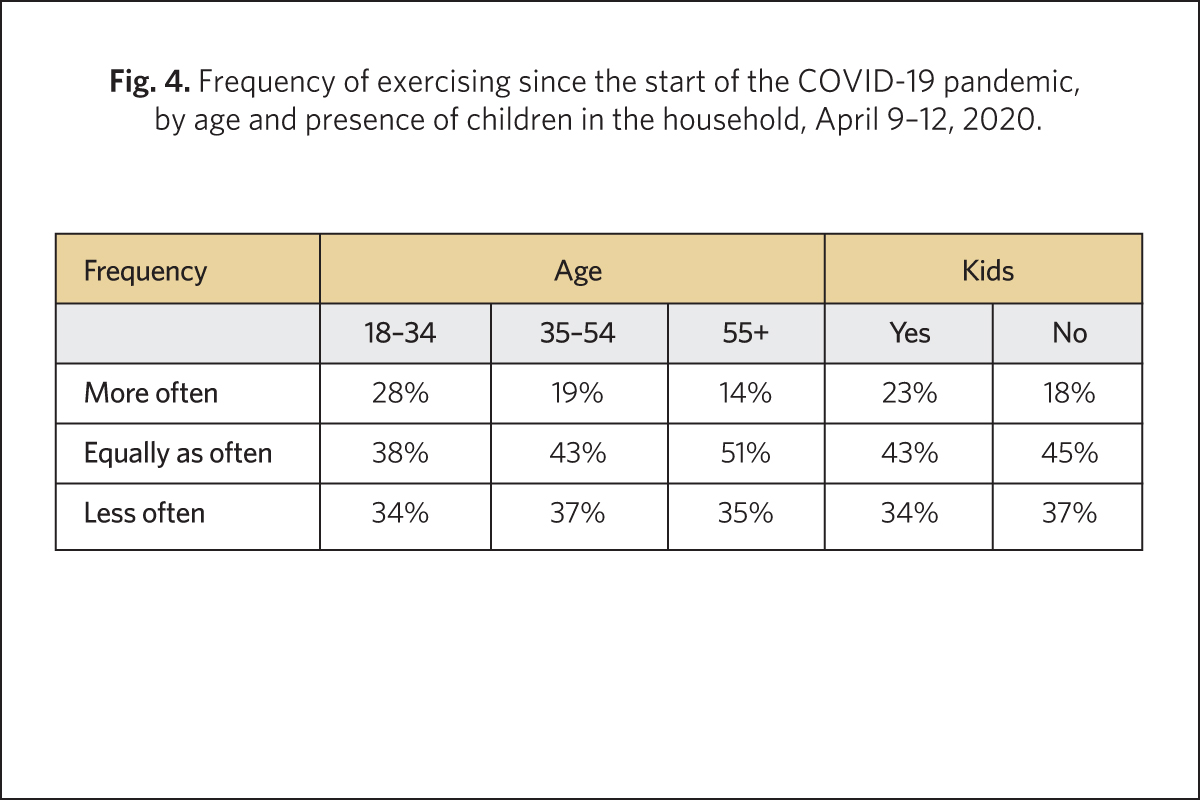 Increased COVID-19 anxiety and decreased exercise may be linked

According to the Canadian Psychological Association, regular physical activity can reduce day-to-day stress, can prevent depression and anxiety disorders, and may be as effective as psychological and pharmaceutical treatments for depression and anxiety.6 At the same time, however, mental health challenges, such as anxiety and depression, can also make it difficult to adopt or continue with an exercise program, particularly during unusual times.

Almost half of adults are going outside less often

Spending time outdoors in nature has a significant impact on mental health and wellness.7 Furthermore, in 2016, Statistics Canada’s General Social Survey found that 7 in 10 Canadians participated in one or more outdoor activities, showing that spending time outdoors is an important part of Canadian lifestyles.8

At the other end of the spectrum, when it came to those who say they are going outside more often, a higher proportion of women (25%) than men (15%) report a positive change.

It will be interesting to see, as spring changes to summer, whether the shares of people in Canada who are going outside, and who are exercising more often, increase with the warmer temperatures.