When it comes to personal and family finances, Canada as a whole has been hit hard by the COVID-19 pandemic. Early estimates indicate that more than 3 million people in this country have applied for the government’s emergency relief and Employment Insurance since March 16, 2020.

The financial downturn has been felt by virtually all families, many indicating that the financial stress is having an impact on their mood, mental health and sleep. People who have immigrated to Canada within the past 10 years and families with children and youth at home are among those most likely to say that they have been challenged financially as a result of the pandemic.

Families see coronavirus as a threat to their financial well-being

According to April 3–5, 2020 survey data1 from the Vanier Institute of the Family, the Association for Canadian Studies and Leger, more than half (53%) of adults aged 18 and older report that the coronavirus outbreak poses a major threat to their personal financial situation, while 36% view the crisis as a minor threat. In contrast, 11% of adults say that the outbreak is not a threat to their finances.

More than 7 in 10 (73%) recent immigrants to Canada (i.e. those who arrived in Canada in the past 10 years) report that their financial well-being is threatened by the pandemic in a “major” way. This compares with 58% of immigrants who came to Canada 10 or more years ago and half (50%) of those born in Canada (fig. 1).

Fig 1. Percentage of the population aged 18 and older who say that the COVID-19 outbreak is a threat to their personal financial situation, by immigrant status. 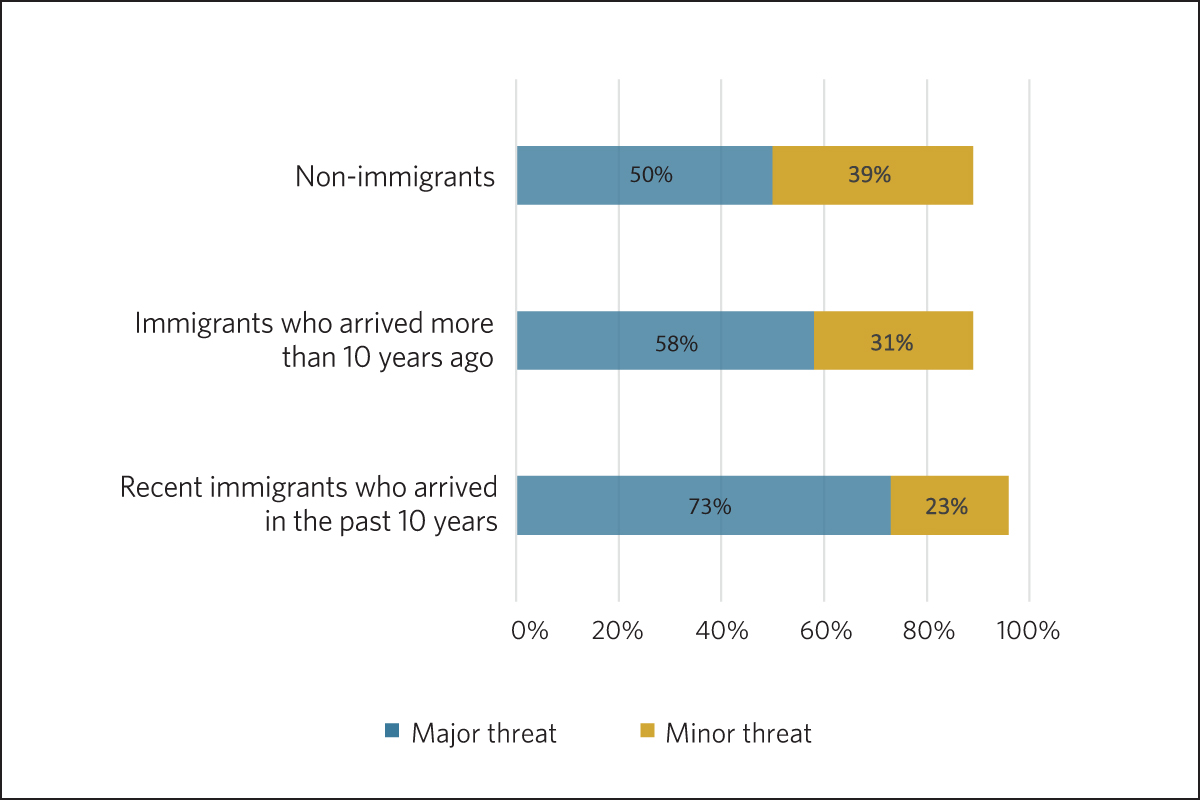 Adults who say that the pandemic poses a “major threat” to their financial situation commonly report “very often” or “often” feeling anxious or nervous (58%), feeling sad (56%) or having difficulty sleeping (44%) since the beginning of the COVID crisis. Families with children at home were the most likely to report heightened anxiety and reduced sleep (fig. 2).

What is particularly interesting among those who see the outbreak as a “major threat” to their financial situation is that parents of teenagers, rather than parents of younger children, most frequently report feeling anxious or sad “very often” or “often.” It is conceivable that this reflects parents’ concern about youth missing school, having to be home schooled, losing their jobs or work experience, and having an uncertain future with respect to a post-secondary education, in addition to concerns about the overall financial well-being of the family.

Fig. 2. Percentage of the population who view the COVID-19 outbreak as a “major threat” to their financial situation and who “very often” or “often” feel anxious or nervous, feel sad or have difficulty sleeping, by presence of children in the home. 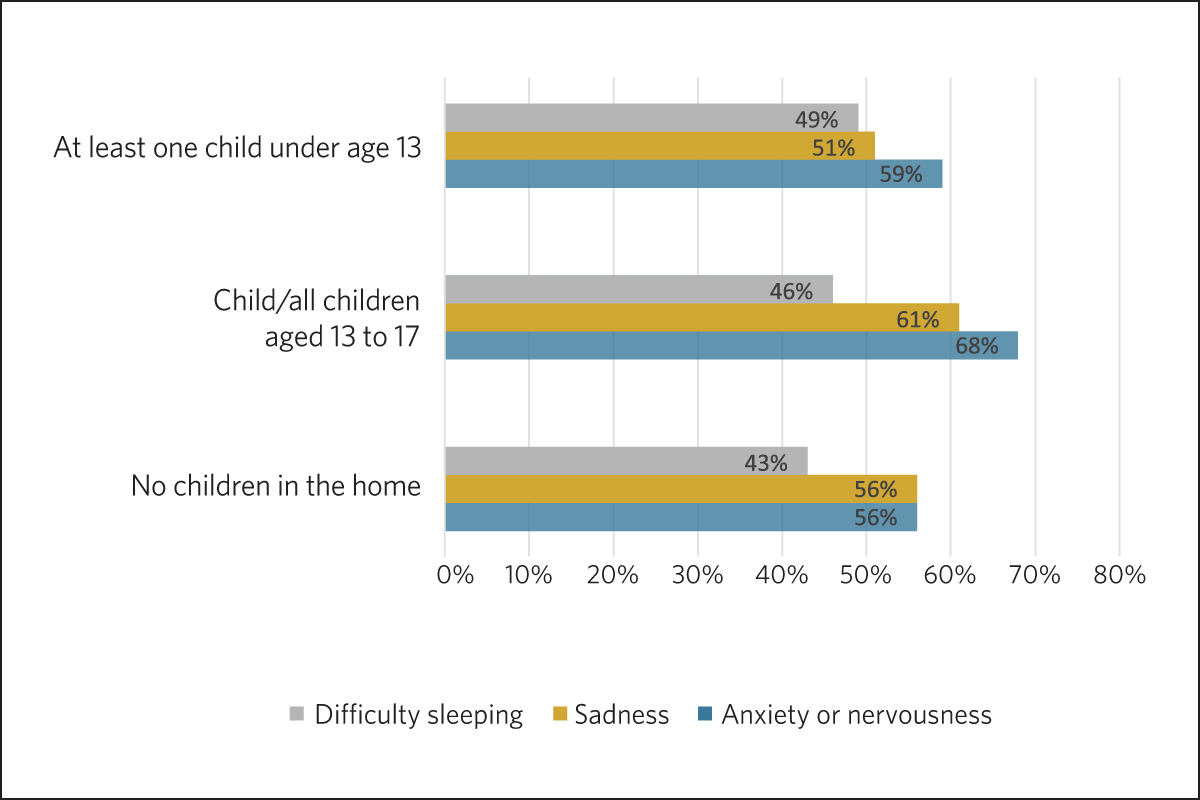 Nearly half (45%) of people in Canada say that their income has decreased as a result of the COVID-19 pandemic. Income losses are impacting some more than others, however. For example, adults who had reported a total household income, before taxes, under $19,999 in 2019 are more commonly reporting lost income in 2020 as a result of the crisis, at 56%, compared with 37% to 48% of those in higher income groups.

A striking 7 in 10 (68%) recent immigrants say that they have had a decrease in income since the start of the coronavirus crisis, compared with about 4 in 10 earlier immigrants (45%) and Canadian-born adults (43%) (fig. 3).

Families with children and youth at home report a negative impact on their income more frequently than families without anyone under the age of 18 at home. Specifically, 54% of adults with children and youth living in their household indicate that at the moment the current crisis is having a negative impact on their income, compared with 41% of those without children.

Fig. 3. Percentage of the population aged 18 and older who report that their income has decreased as a result of the current crisis, by immigrant status. 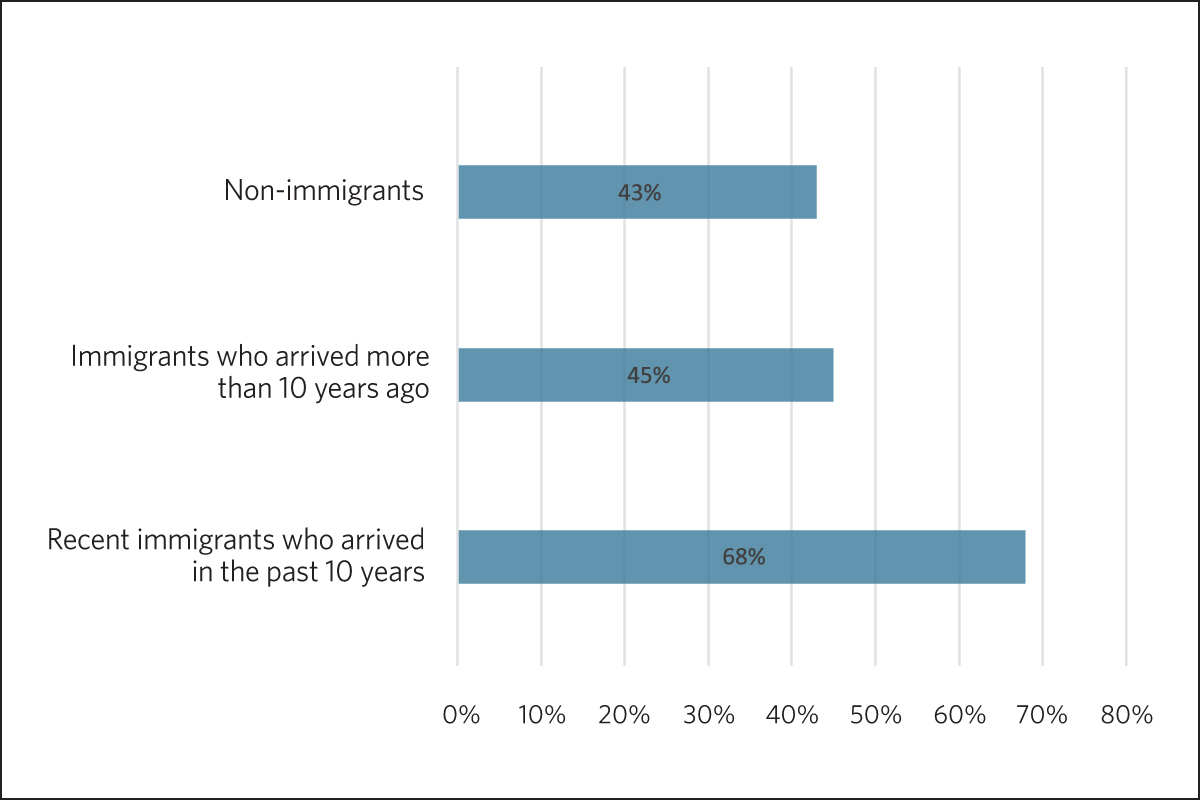 Families report decline in retirement savings and other investments

Although decreases in total income due to job loss may have the biggest or most significant impact on families in Canada, the most prevalent negative financial impact of the COVID-19 pandemic has not been a loss of wages but rather a decline in retirement savings and other investments. More than half (54%) of adults report that their retirement funds or other investments have been impacted negatively since the current crisis started, and the proportion saying so increases with age (fig. 4).

Negative financial impacts on retirement savings and other investments are likely just one of several factors influencing feelings of anxiety or nervousness since the beginning of the pandemic. Although 63% of those aged 65 and older reported that their savings are negatively affected, they in fact had the lowest share of those reporting increased anxiety or nervousness compared with other age groups who had experienced negative impacts on retirement and investments (fig. 4).

Fig. 4. Percentage of the population aged 18 and older who report that the current crisis has had a negative impact on retirement savings or other investments, by age and feelings of anxiety or nervousness. 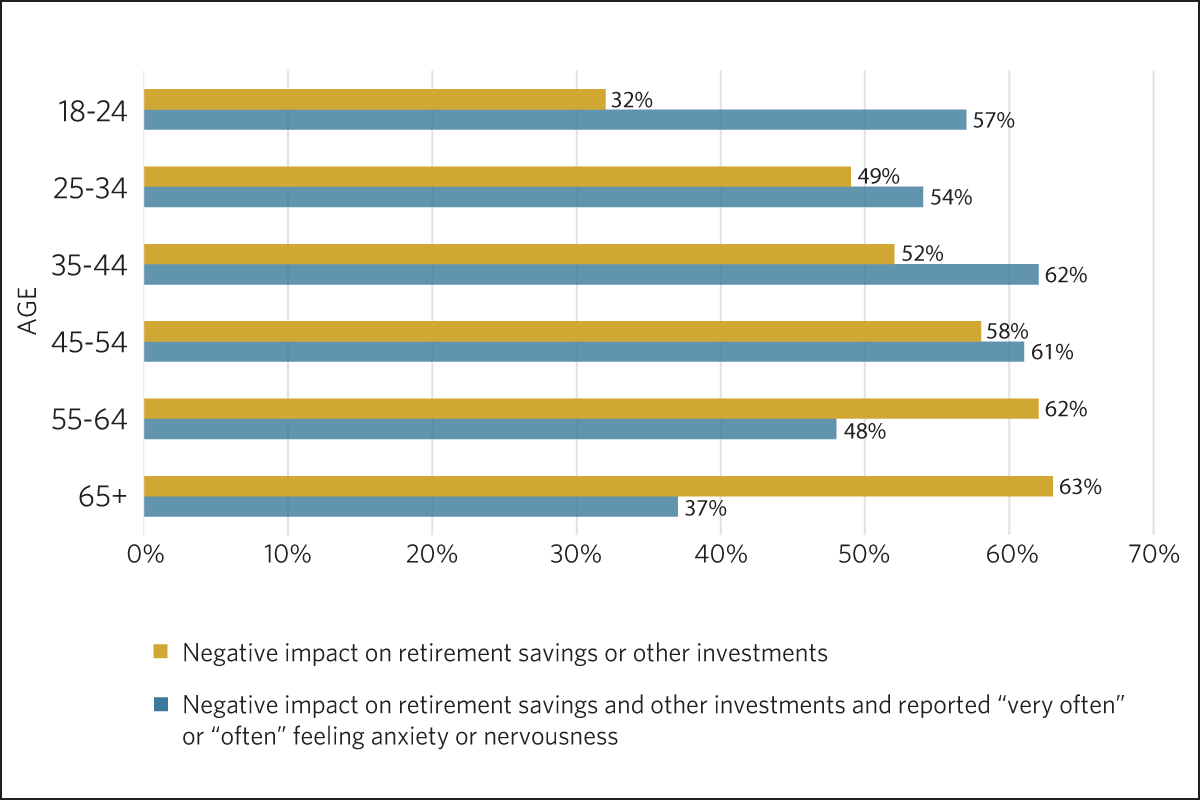 Recent immigrants, young adults and families with children struggle to pay bills and rent or mortgage

Given losses in income and the value of investments, it is not surprising that nearly 3 in 10 adults in Canada say that the COVID-19 pandemic has already had a negative impact on their capacity to pay bills on time (28%) and 2 in 10 to cover their rent or mortgage (22%).

Just over half (51%) recent immigrants are having difficulty in paying bills on time in the current crisis. This compares with 30% of earlier arrivals and 25% of Canadian-born. Nearly half (46%) of recent immigrants say that the crisis has had a negative impact on their ability to pay their rent or mortgage (fig. 5).

Younger people are more likely than those over the age of 45 to report having difficulties in meeting their housing costs, with 31% of those under age 45 reporting difficulty in paying their mortgage or rent, compared with 24% of 45- to 54-year-olds, 17% of 55- to 64-year-olds and only 4% of those aged 65 and older.

About 3 in 10 adults (27%) with children under the age of 18 living in their household saying the COVID-19 pandemic poses challenges to their capacity to pay rent or mortgage, compared with 2 in 10 adults without children in the home. Those with young children, under age 12, were slightly more likely to report this difficulty, at 29%.

Fig. 5. Percentage of the population aged 18 and older who report that the COVID-19 crisis has had a negative impact on their capacity to pay bills on time or to pay their rent or mortgage, by immigrant status. 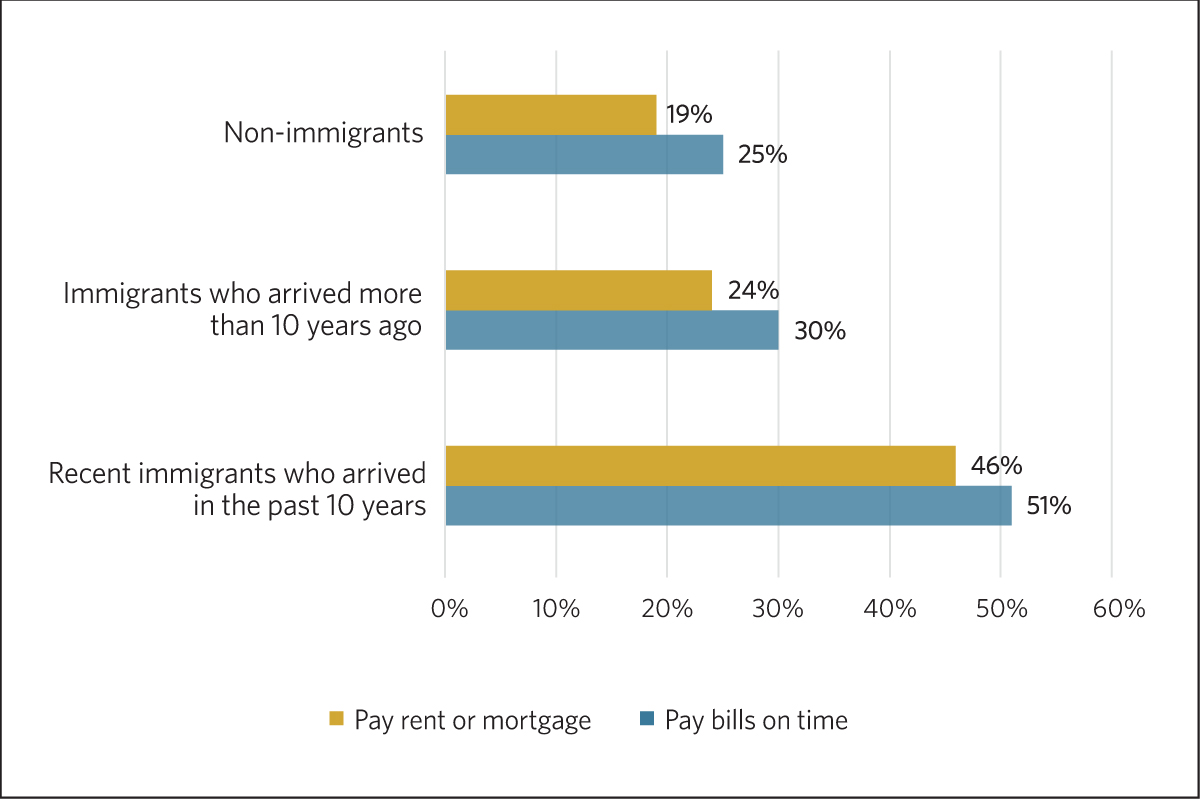 Not being able to pay bills, rent or mortgage may be having a considerable impact on the mental well-being of many people in Canada. More than 6 in 10 adults who can’t pay their bills (61%), rent or mortgage on time (63%) say that they have been feeling anxious or nervous “very often” or “often” since the beginning of the COVID-19 crisis (fig. 6).

Fig. 6. Percentage of the population aged 18 and older who report feeling anxious “very often” or “often” since the beginning of the COVID-19 crisis and report that the COVID-19 crisis had a negative impact on their capacity to pay bills on time or to pay their rent or mortgage. 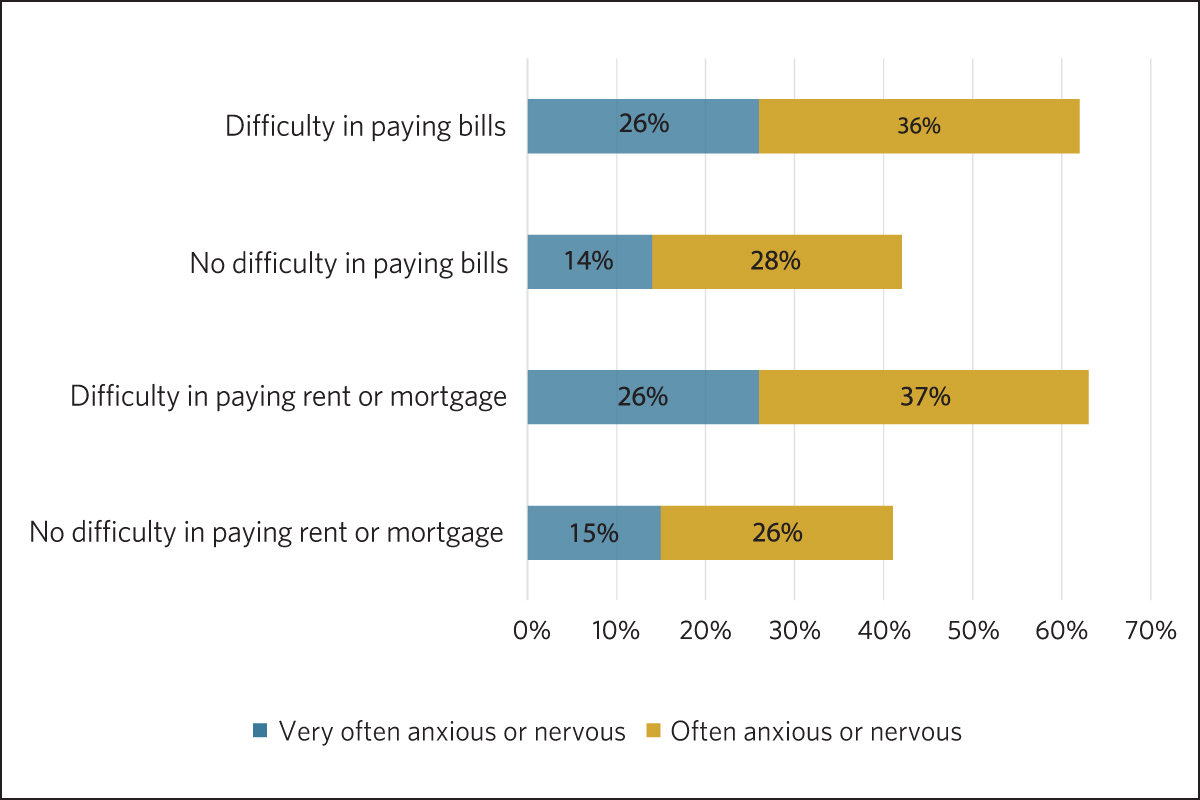 Jennifer Kaddatz is a Senior Advisor at the Vanier Institute of the Family.