In 2015, the 193 Member States of the United Nations Organization, including Canada, adopted 17 sustainable development goals. Over a 15-year time frame, the plan aims to “end poverty, protect the planet and improve the lives and prospects of everyone, everywhere.”1 Eradicating poverty is ranked first because of the extreme vulnerability that it causes, especially in a time of crisis such as the pandemic that we are experiencing now.

Given this period of increased vulnerability, it is even more important to monitor the evolving economic situation and well-being of the most disadvantaged families. Whether one thinks of Indigenous, immigrant, single-parent or other types of families facing poverty, analyzing regularly updated data is vital to follow developments in the situation. In this way, our public decision makers will be able to implement effective policies and programs to reduce poverty, even in a time of crisis.

Based on data from the 2016 Census, almost 1 in 3 immigrant children (32.2%), one of the most economically vulnerable groups in the country, lives in poverty.2 What are the economic difficulties currently facing these families?

In a time of pandemic, the entire population may experience financial losses, regardless of the prior level of economic vulnerability. Data collected during a recent survey conducted over a six-week period by the Vanier Institute of the Family, the Association for Canadian Studies and Leger show this clearly.3

Regardless of their immigrant status, nearly 4 to 5 out of 10 respondents stated that they had experienced a decrease in their income because of the pandemic. Immigrants were represented to a higher degree, however, among those for whom this decrease in income caused difficulty in meeting their short-term financial obligations (fig. 1). In the first weeks following implementation of social distancing measures, almost 3 out of 10 immigrants (29%) stated that they had difficulty paying their rent or mortgage due to the crisis. This was almost 1 out of 10 persons higher than their Canadian-born counterparts (20%). The gap appears likely to persist over the coming weeks. 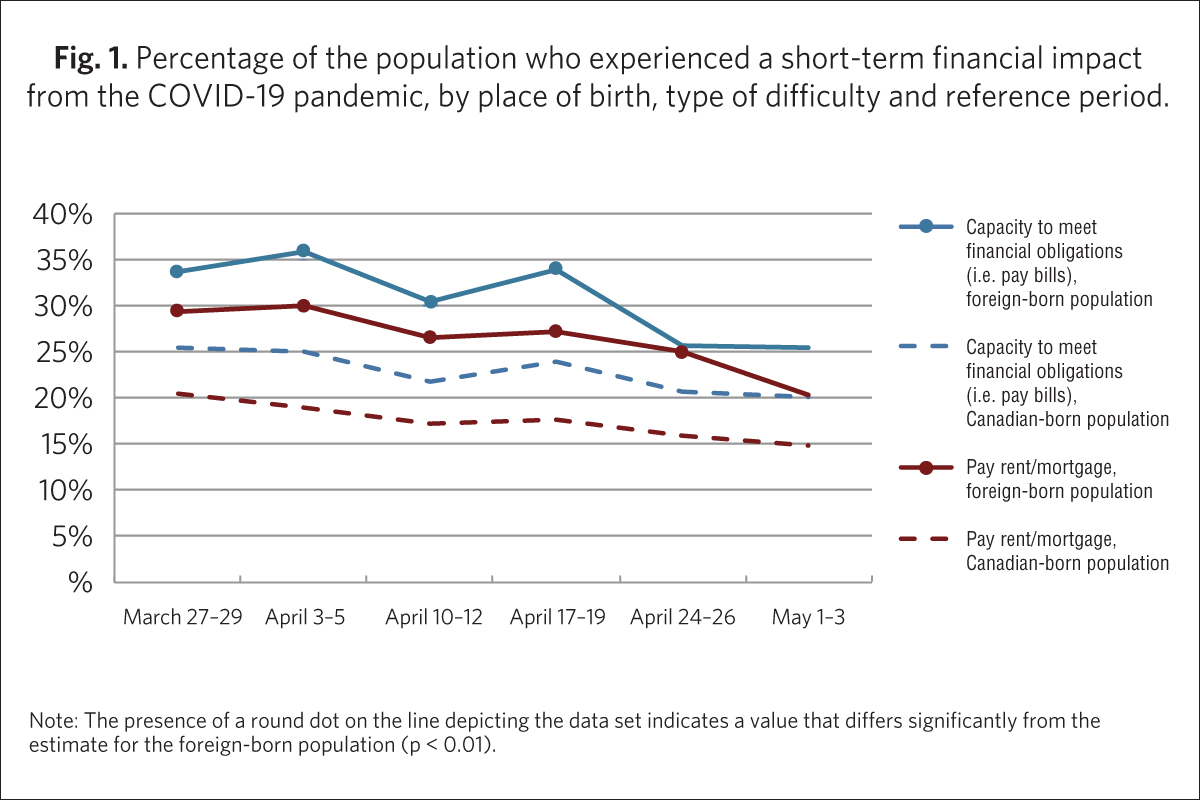 Similarly, a greater proportion of foreign-born versus Canadian-born individuals experienced other short-term financial difficulties, such as paying bills on time. These financial stress indicators make the foreign-born population all the more vulnerable when they encounter difficulty meeting their basic needs, such as having a roof over their heads and accessing related public services, the minimum needed for their well-being and that of their family.

Looking more closely at the economic impact of the crisis on immigrant families, one sees that the negative effects were immediate (fig. 2). In late March, more than 1 out of 2 immigrant parents stated that they had experienced a loss of income because of the pandemic, resulting in a reduced capacity to assist other family members financially. This support might not only have proven even more useful during this difficult time, but its decrease might also have a snowball effect within the most economically vulnerable ethnic communities. 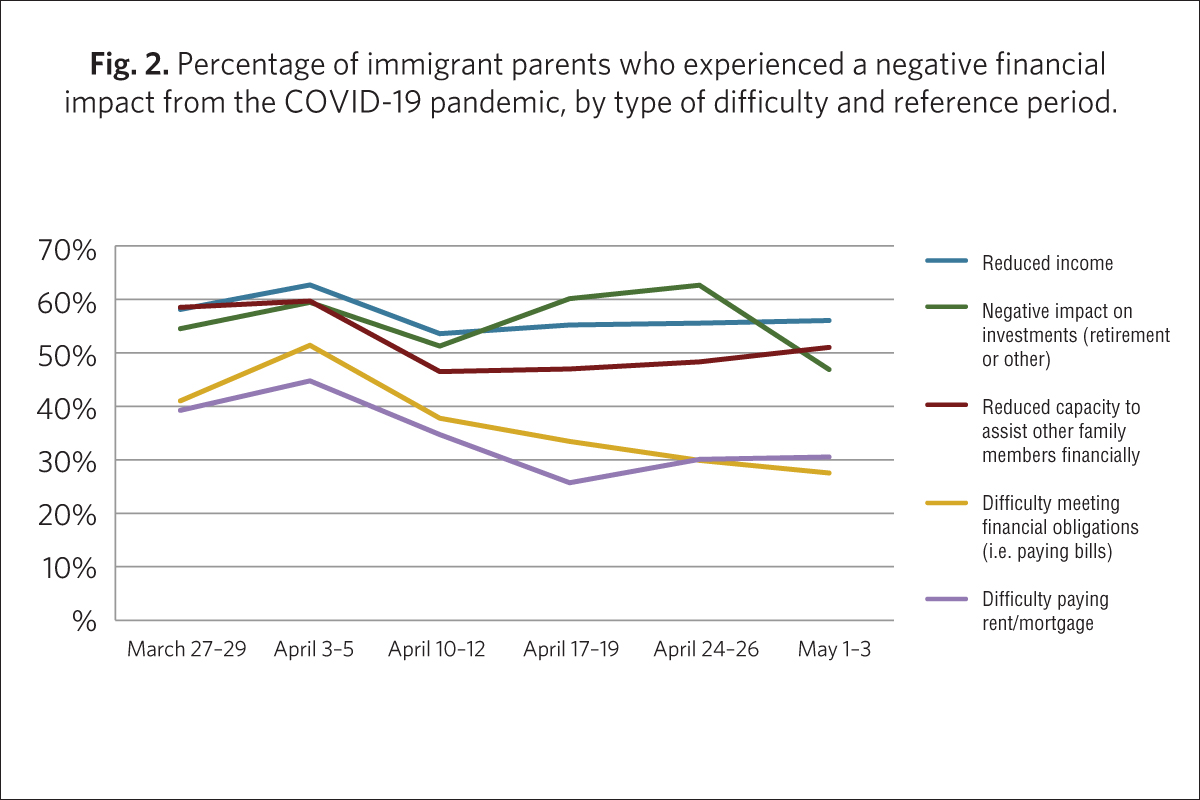 On a more positive note, trends observed over recent weeks have shown a decrease in the proportion of immigrant parents who experienced immediate financial impacts. After reaching a high during the first week of April, the proportion of immigrant parents who had difficulty paying their rent or mortgage, as well as those who had difficulty meeting their other financial obligations, decreased by more than 15 percentage points in the following four weeks. While it is too early to determine the precise cause of the decrease, these results suggest that businesses that have adapted in an ongoing effort to maintain services despite distancing rules, coupled with the financial measures put in place by governments, may be helping lessen the economic vulnerability of immigrant families in the immediate term.

Beyond direct financial impacts, economic vulnerability can also limit the ability to adopt certain behaviours that promote good health. For example, some parents of immigrant families may have to make difficult choices between the basic needs of their family and the resources they have to reduce their exposure to COVID-19. Furthermore, some economically vulnerable families do not have any credit cards to shop online, cannot pay the added cost imposed by grocery stores for delivery or packaging of items, or do not have the necessary financial resources to buy provisions to last them over several days. Not to mention that it might be more difficult for individuals without a car to transport a large amount of provisions on foot or on public transit.

These constraints might explain why twice as many immigrant parents who experienced immediate financial difficulties (46%) went to the grocery store more than once a week, compared with their Canadian-born counterparts, who had not experienced the same difficulties (23%) (fig. 3). No significant difference was observed between the two groups regarding compliance with other safety measures, such as social distancing and frequent hand washing, which suggests that this increased exposure cannot be explained by a lack of awareness. 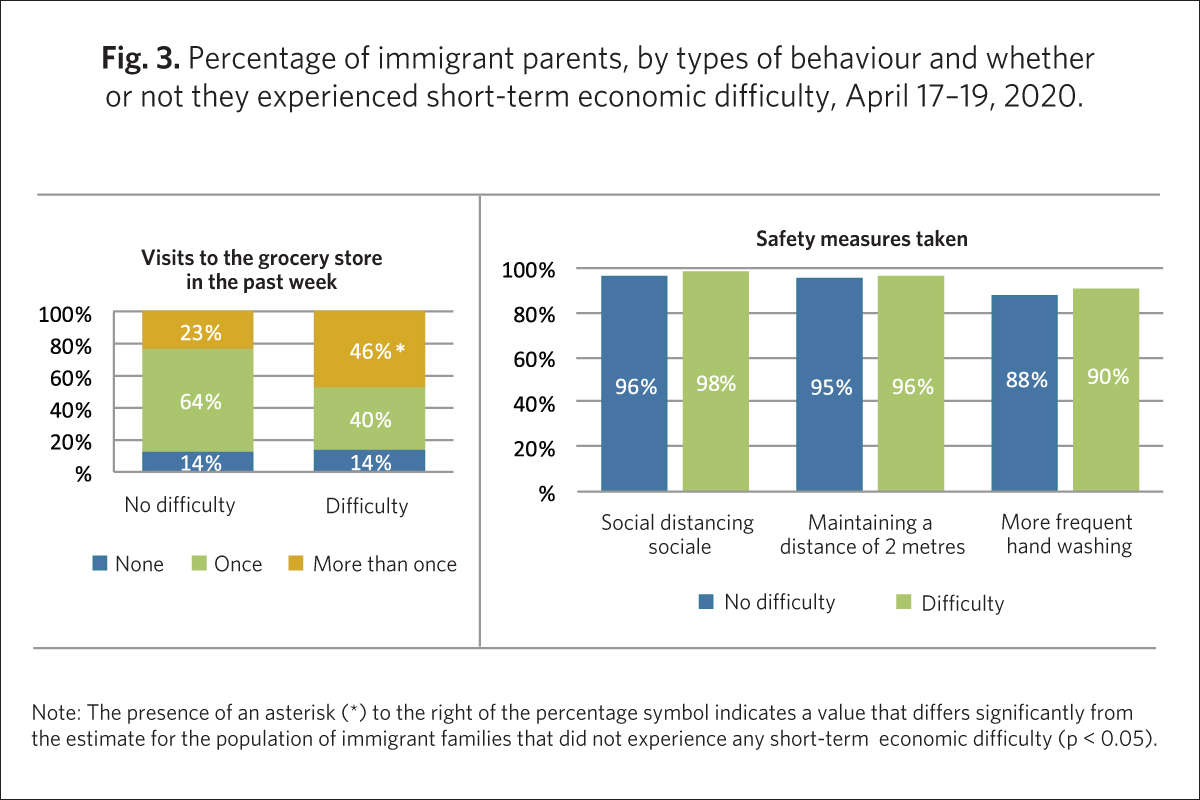 In instituting sustainable development goals in 2015, the 193 States around the world recognized that “inequality threatens long-term social and economic development.”4 Often called a land of immigrants, Canada nevertheless remains a country in which immigrant families face a high risk of economic vulnerability. Data collected at the start of the pandemic show that inequalities persist in a time of crisis. Immigrants are harder hit financially in the immediate term than their Canadian-born counterparts.

Six weeks of collecting weekly data would seem to bear witness to a national resiliency or capacity to adapt to this extraordinary situation by mitigating certain negative effects. The downward trend in the prevalence of immigrant families that experienced difficulty paying their mortgage or rent, or meeting their other financial obligations, can be seen as a positive. But if the past weeks have taught us one lesson, it is that the situation changes rapidly in a time of pandemic. It is therefore more important than ever to closely monitor the situation and to be sure to identify, in a timely manner, the needs of the most vulnerable families, be they Indigenous, immigrant, single-parent or other. Eradicating poverty is an even greater challenge in a time of crisis.