In some ways, Canadians are making the best of their time in social isolation, according to four weeks of March and April 2020 survey data1 from the Vanier Institute of the Family, the Association for Canadian Studies and Leger.

As of the April long weekend (April 9–12, 2020), half of the country’s population aged 18 or older say they are relaxing “more often” now than they were before the pandemic.

Six in 10 adults are watching movies, television and videos or listening to podcasts more often than before the COVID-19 crisis started. Four in 10 are on social media more frequently.

More than 2 in 10 adults in Canada have increased the amount of time they spend listening to music, reading and playing games during the pandemic.

Half of adults are relaxing more, but some families report decreases in down time

Good news in these challenging times: people in Canada report that they are relaxing more. 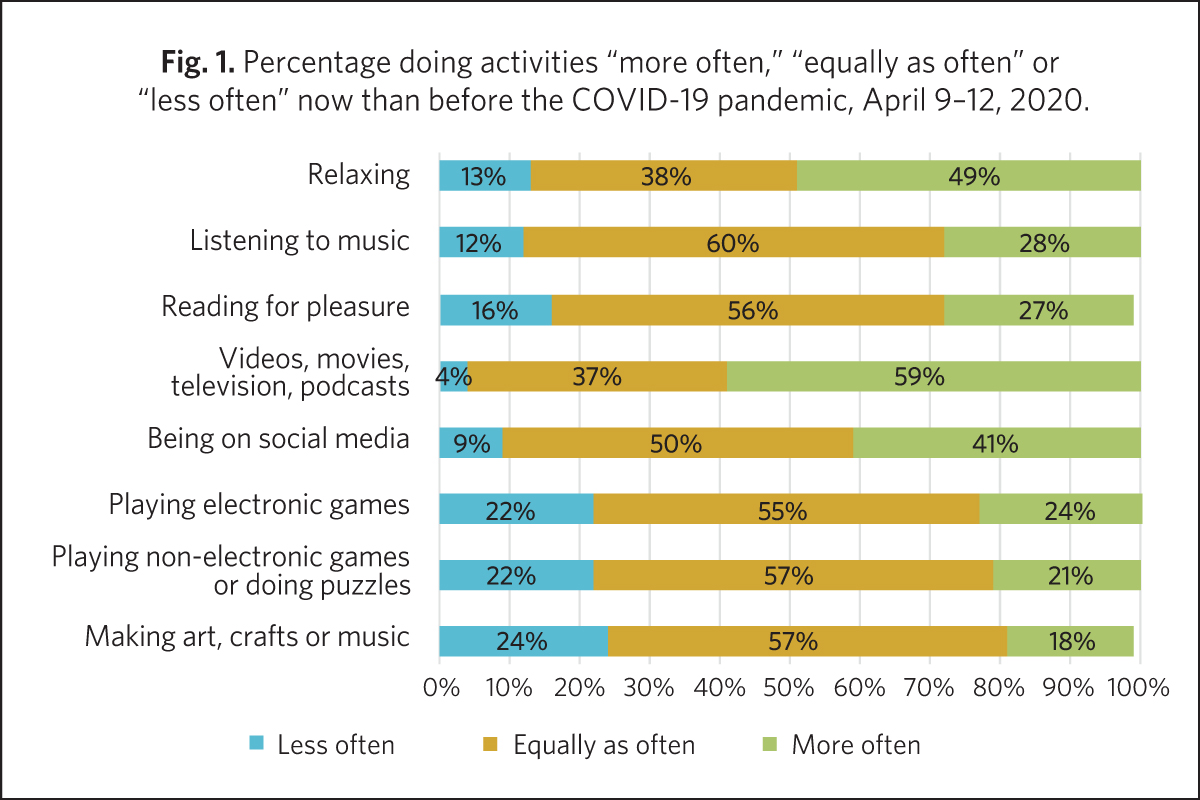 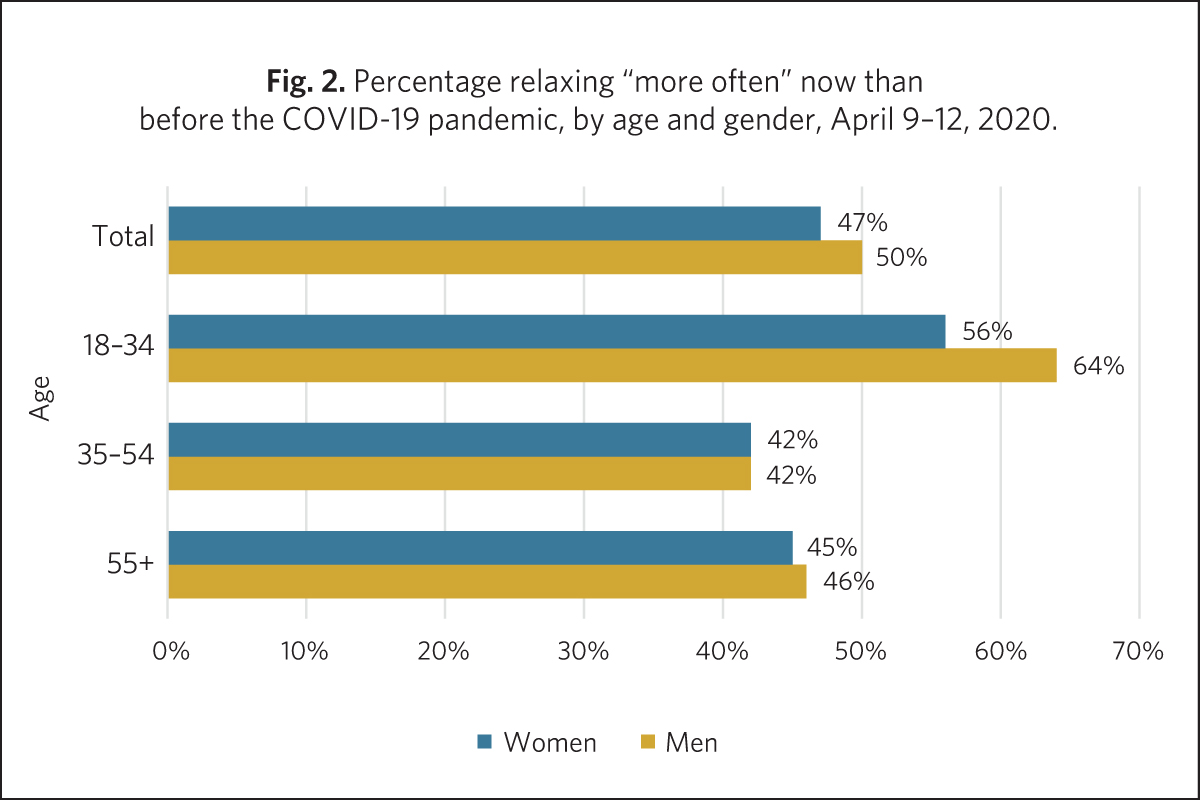 Perhaps not surprisingly, adults with young children at home (43%) are less likely than with no children or youth at home (48%) to say that they are relaxing more during the COVID-19 pandemic (fig. 3).

Almost 1 in 4 (24%) of adults who were living in the same home as at least one child under the age of 13 actually reported relaxing less often than before the crisis began. 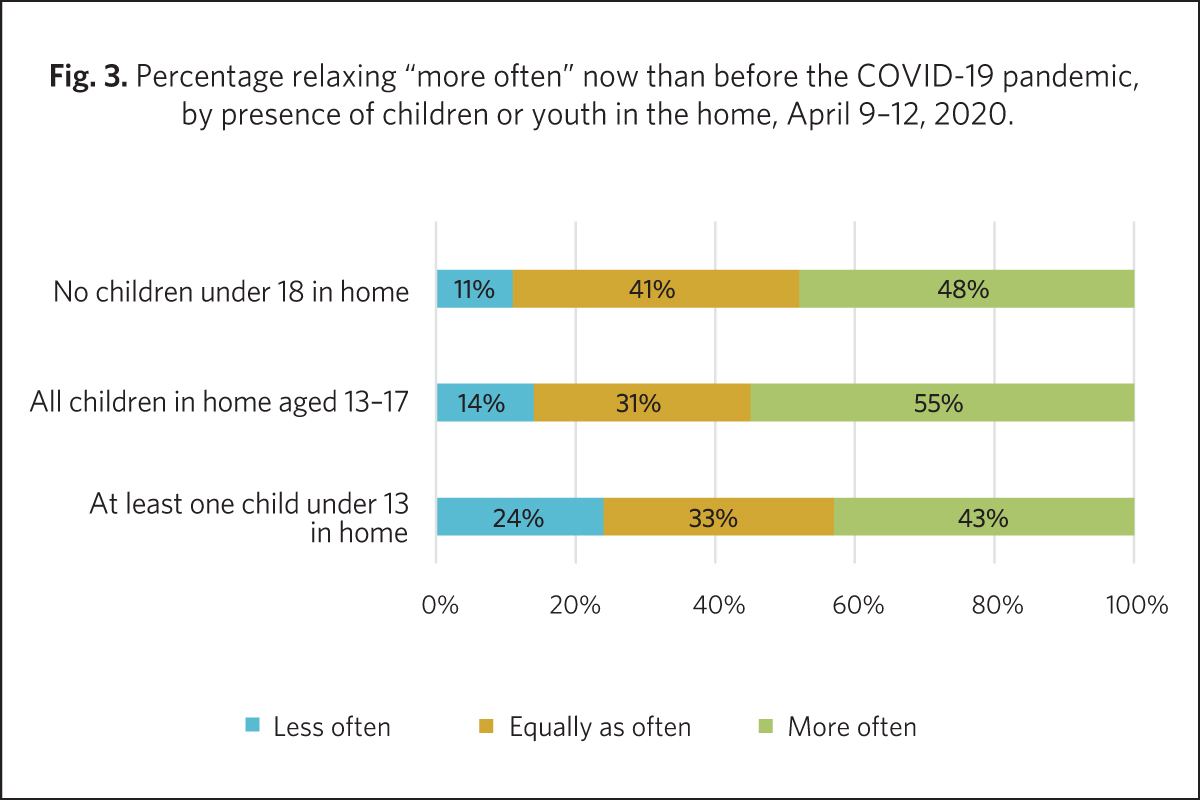 About 3 in 10 adults in Canada are listening to music more often now (28%) than before the start of the COVID-19 crisis (fig. 1). This is similar to the share of those saying that they are reading for pleasure more frequently (27%).

Women are about as likely as men to spend more time listening to music (27% and 29%, respectively), but a larger share of women than men (29% and 24%) report reading more often since the start of the crisis.

Survey data from April 9–12 show that many adults in Canada are turning to their screens to keep busy, as public health measures are keeping them at home.

Of all the activities for which adults were surveyed, “watching movies, television, videos or listening to podcasts” and “being on social media” had highest shares of adults, at 59% and 41% respectively, who say they do these activities “more often” since the start of the COVID-19 crisis (fig. 1).

Furthermore, there appears to be an increasing tendency toward screens as the pandemic continues:  53% of adults in Canada had said they were watching movies, television, videos or listening to podcasts more often in week 2 of the survey (March 27–29) compared with 59% in week 4 (April 9–12).

The playing of electronic games also appears to be on the rise: 24% of all adults, or 26% of men and 22% of women, say that they are playing electronic games more now than they did before the pandemic started, according to the April 9–12 survey (figs. 4 and 5). These findings were similar to those published by Statistics Canada for the period of March 29–April 3, based on data collected in a web-based panel, which reported that 22% of all Canadians were now spending more time playing video games.2

Younger adults, especially men, have significantly increased the time they spend playing electronic video games since the start of the pandemic. More than half of men (54%) and one-third of women (36%) aged 18–34 report that they play electronic video games more often now than they did before (figs. 4 and 5).

As well, adults who had at least one child under the age of 13 living in their household (28%) were slightly more likely than those who had only teenagers at home (26%) and those who did not live with children at home (22%) to report playing video games more often since the COVID-19 crisis began. 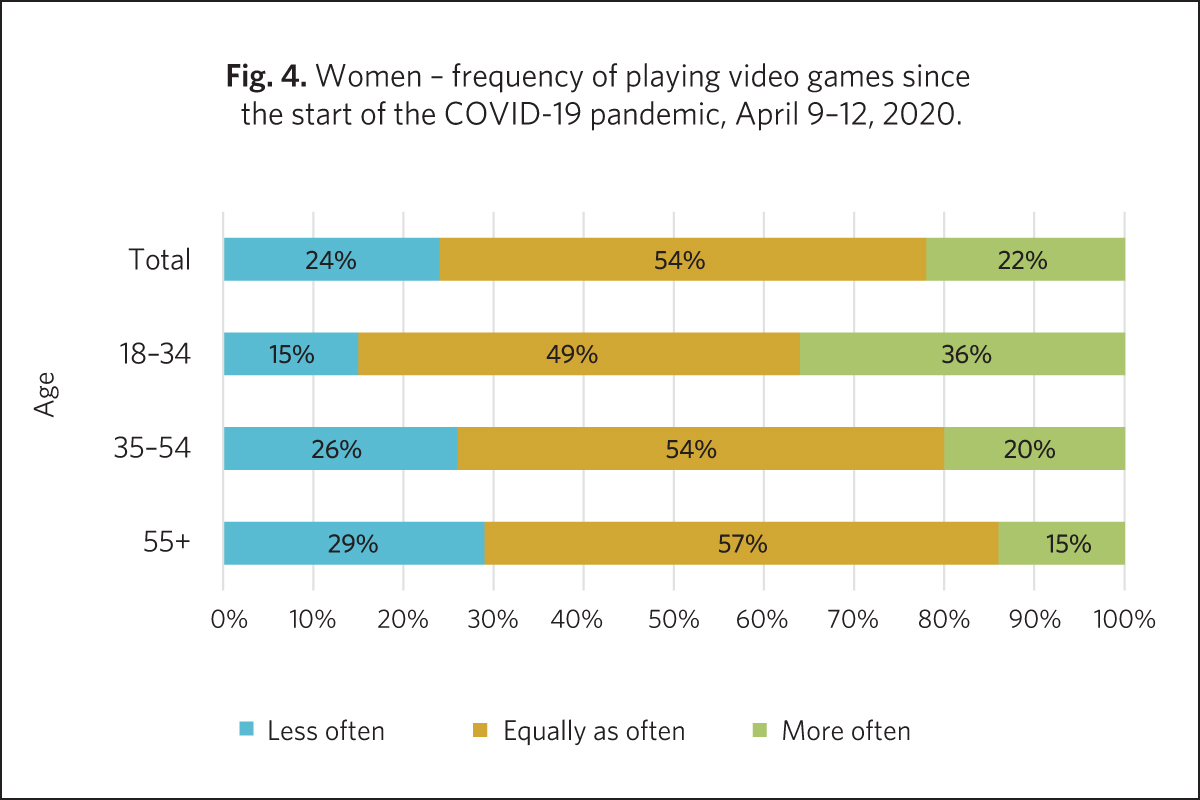 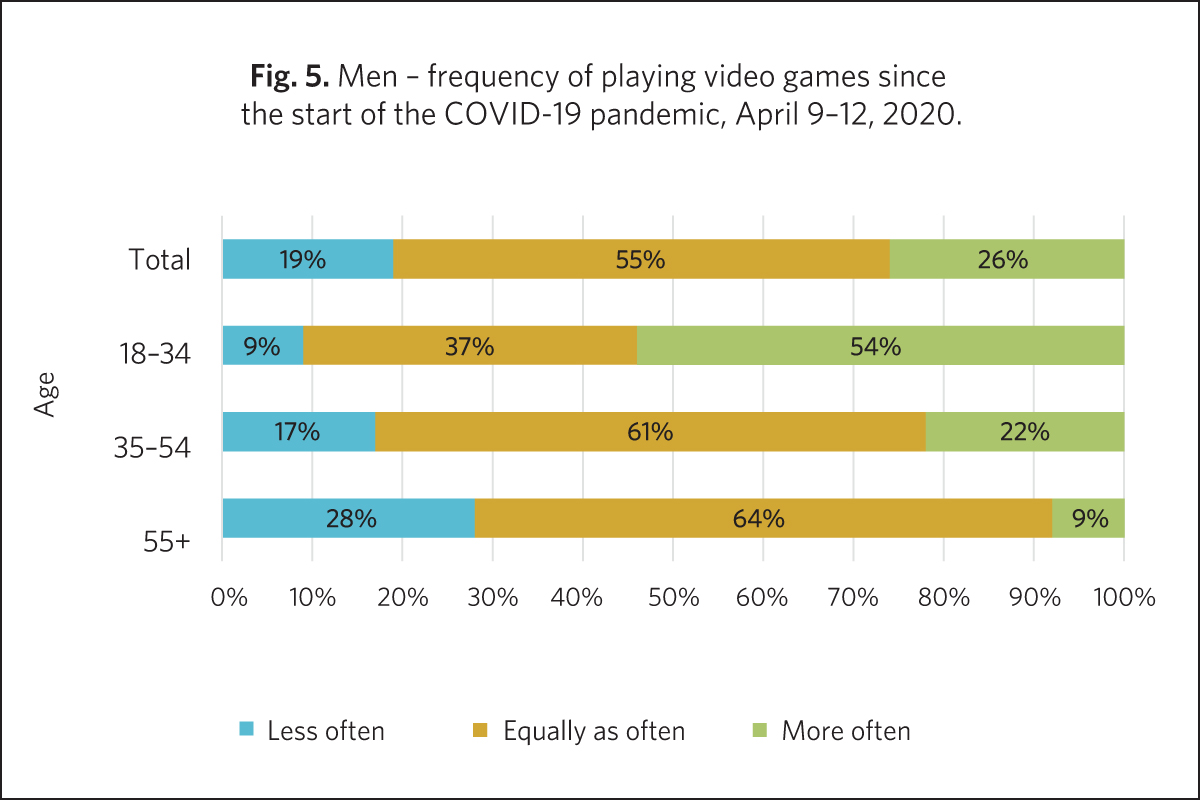 Despite the apparent popularity of screen time in general among adults in Canada, the share of those who report having increased their electronic gaming time since the start of the pandemic (24%) is only slightly higher than the share who have increased the amount of time they spend playing board games or doing puzzles (21%) (fig. 1). The share of adults who say that they now undertake these activities “less often,” at 22% and 22%, respectively, is also very similar. However, differences exist by gender and the presence of children and youth in the household.

Furthermore, a slightly larger share of younger women than men have increased the time they spend on non-electronic games or puzzles: about one-third of women (33%) and about one-quarter of men (27%) aged 18–34 report spending more time on this type of activity.

A significant proportion of women (54%) and men (55%) reported that they play video games “equally as often” as before the COVID-19 pandemic (figs. 4 and 5), though it is important to note that, in some instances, this could just reflect that they didn’t play video games to begin with.

Adults who had at least one child under the age of 13 living in their household (28%) or teenagers at home (22%) are considerably more likely than those who did not live with children (14%) to say that they have been playing non-electronic games and doing puzzles more often now than before the coronavirus pandemic started (fig. 6).

Furthermore, when young kids were in the house, adults are almost twice as likely as those with no children or youth at home to have increased their time spent making arts, crafts or music since the start of the COVID-19 crisis. As of April 9–12, 3 in 10 (31%) adults who lived in a home with at least one child under the age of 13 say that they have been making arts, crafts or music more often since the start of the pandemic, compared with 27% of those with only teenagers at home and 17% of those with no children under 18 at home (fig. 7). 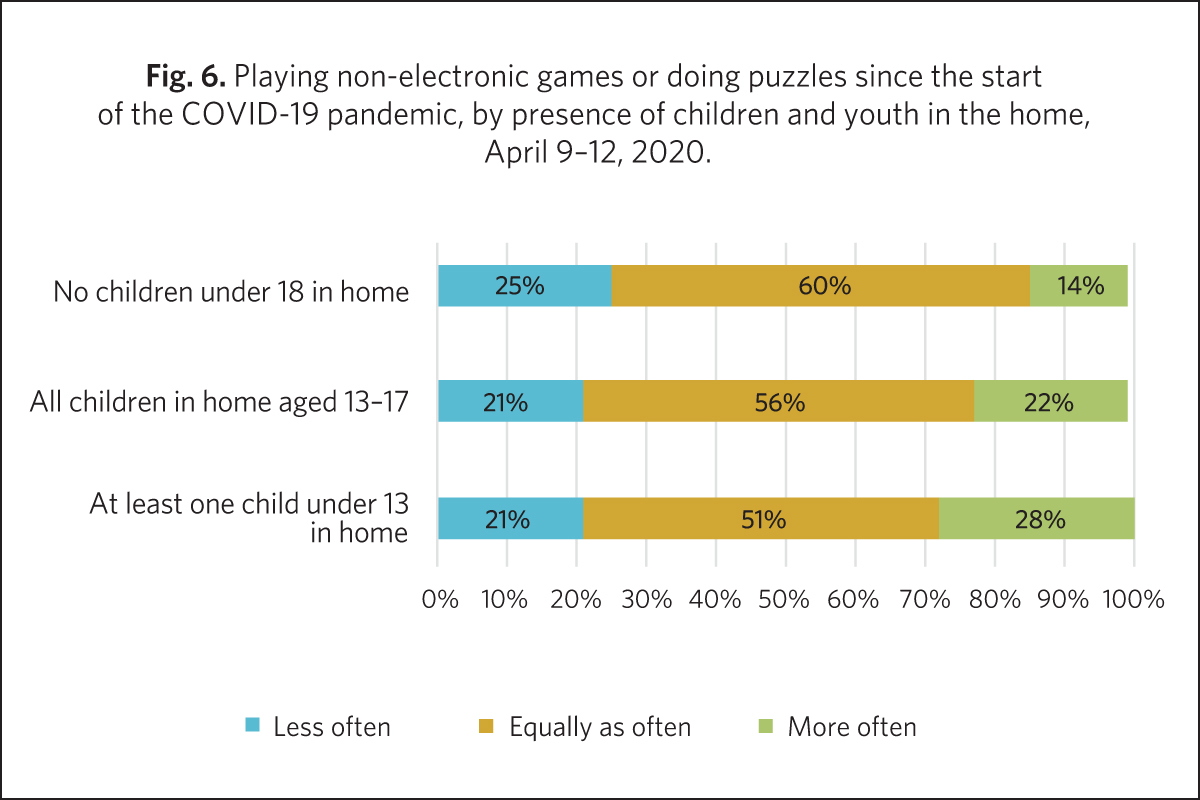 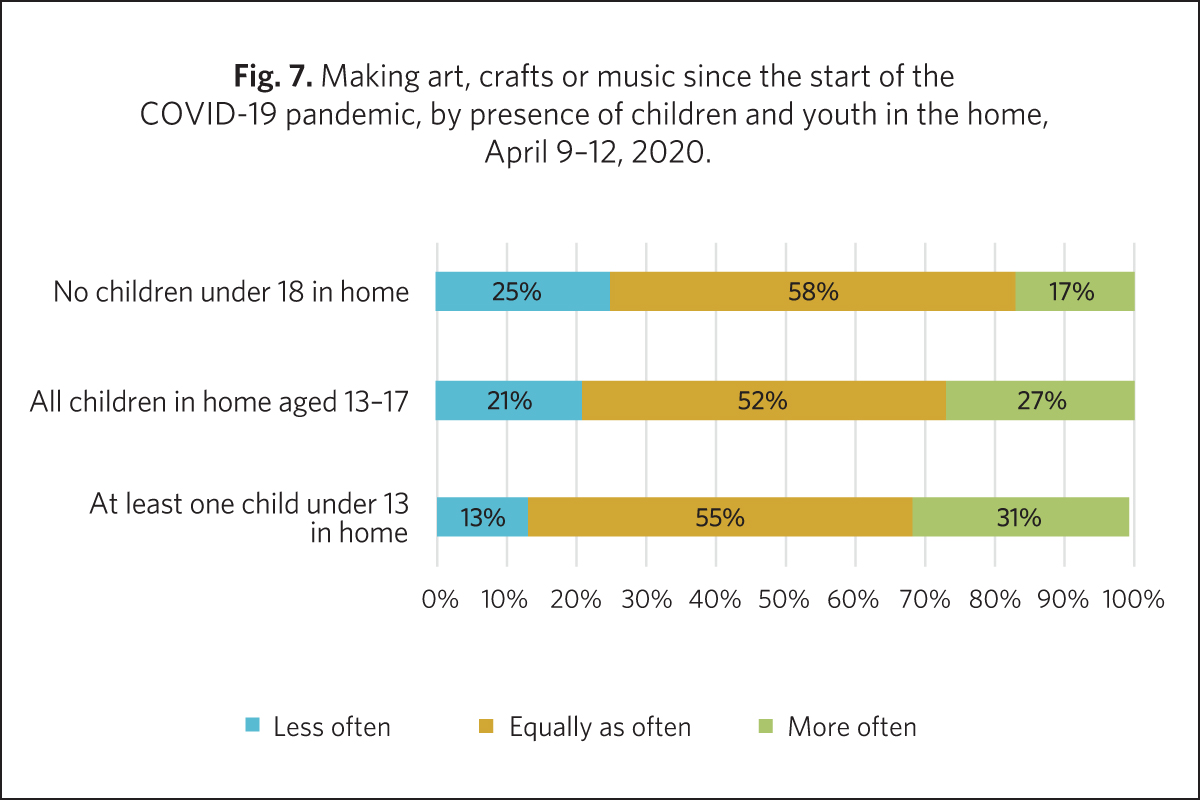 Nathan Battams is the Communications Manager at the Vanier Institute of the Family.

1. The survey, conducted March 10–13, March 27–29, April 3–5 and April 9–12, 2020, included approximately 1,500 individuals aged 18 and older, interviewed using computer-assisted web-interviewing technology in a web-based survey. The March 27–29, April 3–5 and April 9–12 samples also included booster samples of approximately 500 immigrants. Using data from the 2016 Census, results were weighted according to gender, age, mother tongue, region, education level and presence of children in the household in order to ensure a representative sample of the population. No margin of error can be associated with a non-probability sample (web panel in this case). However, for comparative purposes, a probability sample of 1,512 respondents would have a margin of error of ±2.52%, 19 times out of 20. Figures may not add up to 100% as a result of rounding.